MRS. BUSH: Thank you very much, Jessie. I got to see Jessie's artwork, too, and it really is very, very fabulous. It was great to see it and good to be with a class that's working on that magnificent work that represents the Mississippi River, where all of these young people who are here working on the art live.

I want to thank everyone for being here today. I'm so delighted to be here at the Ogden Museum of Southern Art -- University of New Orleans. The Ogden Museum houses the largest and most comprehensive collection of Southern art in the world. And this is a museum that I've known about forever -- for really a very long time. I've received catalogs from the museum. I had a friend who was an ambassador and he borrowed from the Ogden Museum of Art for the residence where he was, in the country where he represented the United States. And I worried about the Ogden Museum after Katrina, that was one of the museums that came to mind and I was hoping it was all right.

But I had never been here before. Today was my very first visit and it was really great to get to see it.

I want to recognize Governor Landrieu, who's here with us today -- your Lieutenant Governor. Governor Landrieu has been very active in working on the center of culture that New Orleans is and that Louisiana is. And a way for us to all learn from what happened after Katrina, ways that we can protect all of our assets across the United States, our cultural assets -- and around the world, frankly. I think people from around the world are coming to also look at this and see what each country can do to protect from a natural disaster like the earthquake we've just seen in China or, of course, the hurricanes here on the Gulf Coast.

I especially want to recognize Dr. Anne Radice, the Director of the Institute of Museum and Library Services. She does a really terrific job, I think all of you know who has worked with her, anybody in the library or museum business. Also Mr. Roger Ogden, who was the founder of the Ogden Museum of Southern Art. And Roger is here -- very nice to get to meet you. And of course, the Director of the Ogden Museum of Southern Art, "Rick" Gruber. Rick, thank you very much, thank you for giving me the tour. And I can tell your great work here, including this building that we're in right now, that they are in the midst of wanting to renovate and add to the museum next door.

Julia Reed, who is the President of the Board of Directors of the Ogden Museum of Southern Art -- thank you very much, Julia, thank you for facilitating this visit for me. Julia was telling me recently when I saw her about this museum and how they're working on this capital campaign to be able to complete this. So I want to urge everyone who happens to be watching or listening: Get involved in the campaign, be generous. It's certainly worth it, you can tell as you look here and see this magnificent vaulted ceiling above us and this room behind us.

Also I want to introduce General Doug O'Dell, who is the new Federal Coordinator for Gulf Coast Rebuilding. There you are -- General, do you mind just standing up so everybody can see you. If you haven't met him yet -- (applause) -- he's replacing Don Powell as the liaison between the White House and the administration on the ground here in the Gulf Coast. And he's working with your state and local governments to make sure rebuilding efforts move forward as smoothly as possible. And thank you very much, General O'Dell.

Museums and libraries preserve the heritage that makes us who we are. And by keeping us in dialogue with our past -- which books and works of art do -- artwork and artifacts can help us make a better future.

As someone who lives in a museum -- the White House -- I see the importance of these institutions every single day in the faces of the hundreds of visitors who visit the White House. Museums and libraries have now taken on a special importance here in the Gulf Coast, especially in the city of New Orleans.

Some Gulf Coast libraries played a critical role helping people recover immediately after the 2005 hurricanes. Here in New Orleans some libraries extended their hours and remained open on Labor Day to aid evacuees. State Librarian Rebecca Hamilton organized a computer drive, and libraries across the nation donated PCs to help meet the needs of those searching for housing and other assistance.

Libraries and museums in this region still play a very, very important role. Their collections are preserving communities' stories and memories. So while physical buildings have been destroyed, the people of the Gulf Coast will never be far from home.

I visited early on a great program here, right after the hurricanes, where children were working on an education project to collect recipes. I mean, when you think of what you lose in a hurricane, what you can lose -- things like your family recipes written in your grandmother's hand. And of course, in this part of the country where food is such -- and hospitality is such an important part of the culture, it's an especially large loss. So this program was working with people to reach out to each other to find their favorite recipes and see if they can't match the recipe that their grandmother or their great-grandmother wrote and which ended up being a very important part of their family history. 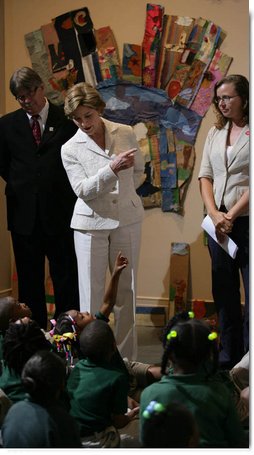 Here at the Ogden, you are cataloguing area history through more than 3,000 works of Southern art. And through programs like Artists and Sense of Place, you're reaching out to local schools to help the next generation, like Jessie, examine exactly what it means to live here on the Gulf Coast. And that big Mississippi River that I just got to see with a group of 1st graders who were having a wonderful time really shows me how museums can use art to reflect the history and the significance of their culture.

The Institute of Museum and Library Services is supporting community outreach and rebuilding efforts at institutions across the region. This April, many of the museums represented here today received Hurricane Relief Awards to assist in their continuing recovery. These grants will help with museum operations from creating new attractions to conserving damaged objects.

Grant recipients include the Historic New Orleans Collection, which was one of the first museums in the area to reopen after the hurricanes. And I was able to tour this beautiful French Quarter museum in May of 2006. After the floods of Katrina, the museum found that their audience had changed significantly -- with a sudden increase in visitors to special exhibitions and a decline in other museum activities. So they'll use their IMLS grant to examine how they can better meet the needs of this post-hurricane New Orleans population.

Another grant recipient, the Lynn Meadows Discovery Center in Gulfport, will use their IMLS grant to fund the WINGS performing arts program. WINGS received a 2007 Coming Up Taller award from the President's Committee on Arts and Humanities just last January for its creative work. This program is giving youth an outlet to learn acting skills and life skills as their families recover from the storms.

These efforts show how IMLS grant recipients are playing a central role in Gulf Coast rebuilding. And they show why museums and libraries across the nation must prepare now to respond to future disasters. In times of upheaval and challenge and disaster like people on the Gulf Coast have faced, we depend on these institutions to hold our communities together.

Through restored exhibits and collections, and renewed local outreach, the museums and libraries of the Gulf Coast are proving that this region's culture and spirit are stronger than any storm. Congratulations to the IMLS recipients for your participation in this effort. 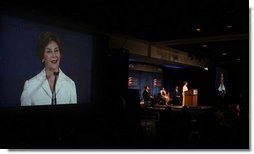 Thank you, Dr. Anne Radice, and thank you all at the Ogden Museum for hosting this great group. Thank you all very much and God bless your good work. (Applause.)