MRS. BUSH: Thank you all. Thank you very much, Teira. Thank you -- we know you are a very successful student and we want to congratulate you on that.

I want to acknowledge some people who are in the audience, and I'm not sure that I can see all of them. I think Governor Mitch Landrieu is here, the Lieutenant Governor of the State of Louisiana, and his daughter Gracie. Thank you very much for joining us. The First Lady of Louisiana, Supriya Jindal is here. Thank you very much, Supriya, for being here with us. (Applause.) 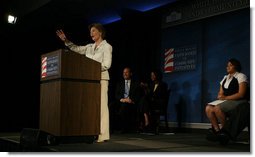 If I'm missing someone it's because the lights are blinding me and I can't see. But I want to welcome everyone that's here, and especially Jay Hein. Thank you very much, Jay. Jay is the Director of the White House Office of Faith-Based and Community Initiatives, and he spends every day all day working on the same issues that every one of you also work on, because I know that in this crowd are leaders of faith-based and community organizations, foundations, think tanks, and government representatives. And I know that each one of you are here because you're dedicated to helping others, to spending your lives and your work to help other people. You represent the very strength of our country, and that is our citizens' genuine interest in the well-being and the success of their neighbors.

Here in New Orleans, this strength was seen by the overwhelming response to Hurricane Katrina. Americans contributed over $2.5 billion* in private resources to the recovery effort after the storm. And I know that you all have already heard that more than a million people have volunteered on the Gulf Coast in the years that followed. This outpouring of generosity is the most effective force at work in the region today. And we hope that you all can build on it for years to come.

President Bush launched the Faith-Based and Community Initiative in 2001 because he recognized that the spirit of compassion that our citizens have is our very asset when it comes to meeting community needs. The federal government may have great resources, but it cannot and it should not solve great social problems alone.

Instead, government is most effective in addressing communities' needs when it trusts local leaders and it partners with local organizations like the ones you lead. The charter school movement here in New Orleans is a great illustration of this philosophy -- and one of the best success stories on the Gulf Coast.

Hurricane Katrina damaged or destroyed hundreds of schools in the Gulf region, leaving thousands of students displaced. But today, the vast majority of the schools in New Orleans are up and running, with more than enough room available for children as they start to return home.

Around 40 percent of these schools are charter schools, which provide greater flexibility and accountability than traditional public schools. New Orleans has the highest percentage of charter schools than any other city in the United States.

The federal government has provided more than $2.5 billion to Louisiana for education, including $45 million to strengthen the charter school movement. And I'm delighted to hear that Teach for America will add to these efforts by placing 250 teachers in the Orleans, Jefferson, and St. John the Baptist parish schools next year.

This June, Langston Hughes will be the first Recovery School District "Quick Start" school to break ground on its new building. And it will quadruple in size next year -- from its current enrollment of 100 students in the 4th and 5th grades to 400 students in K-6.

Faith-based schools have also joined the charter schools in meeting the educational needs of students in New Orleans. Following the hurricanes, Catholic schools of Greater New Orleans opened their doors to every student, regardless of his or her ability to pay. Today, about 40 percent of students in this area are educated at parochial schools -- like Mount Carmel Academy in Lakeview. Thanks to Sister Kathleen Finnerty, the Superintendent of Catholic Schools, and to so many others for setting this example of how faith-based institutions can meet pressing community needs.

And schools are not the only recovery effort being led by faith-based and community organizations. In just a minute you'll hear from Danny Wuerffel, whose "Desire Street Ministries" is training leaders to revitalize impoverished neighborhoods. Last January, I saw the efforts of another great organization -- Reconcile New Orleans -- which is helping youth gain skills to successfully enter the hospitality and restaurant industries, which comprise the second-largest non-governmental workforce in this city.

From youth development to substance abuse treatment, building houses to teaching basic reading schools [sic], faith-based and community organizations are the foundation upon which a better and stronger Gulf Coast can be rebuilt.

The federal government has committed to supporting this effort with more than $120 billion to date. You've already heard from General O'Dell, who is working with state and local partners to accelerate the rebuilding of levees and public infrastructure, housing, schools, and health care clinics.

While the government can help rebuild brick and mortar, the organizations represented in this room are best equipped to mend hearts and lives. Through your inspired local leadership, we can renew New Orleans and establish the Gulf Coast as a region of hope for all Americans.