For Immediate Release
Office of the Press Secretary
May 26, 2008

A few moments ago, I placed a wreath upon the tomb of three brave American[s] who gave their lives in service to our nation. The names of these honored are known only to the Creator who delivered them home from the anguish of war -- but their valor is known to us all. It's the same valor that endured the stinging cold of Valley Forge. It is the same valor that planted the proud colors of a great nation on a mountaintop on Iwo Jima. It is the same valor that charged fearlessly through the assault of enemy fire from the mountains of Afghanistan to the deserts of Iraq. It is the valor that has defined the armed forces of the United States of America throughout our history. 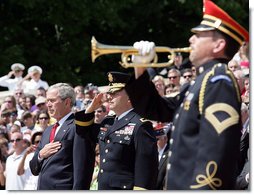 Today, we gather to honor those who gave everything to preserve our way of life. The men and women we honor here served for liberty. They sacrificed for liberty. And in countless acts of courage, they died for liberty. From faraway lands, they were returned to cemeteries like this one, where broken hearts received their broken bodies -- they found peace beneath the white headstones in the land they fought to defend.

It is a solemn reminder of the cost of freedom that the number of headstones in a place such as this grows with every new Memorial Day. In a world where freedom is constantly under attack and in a world where our security is challenged, the joys of liberty are often purchased by the sacrifices of those who serve a cause greater than themselves. Today we mourn and remember all who have given their lives in the line of duty. Today we lift up our hearts especially those who've fallen in the past year.

We remember Army Specialist Ronald Tucker of Fountain, Colorado. As a young man, Ronnie was known for having an infectious smile and a prankster's sense of humor. And then he joined the United States Army, which brought out a more mature side in him. Ronnie transformed from a lighthearted teenager into a devoted soldier and a dutiful son who called his mother every day from his post in Iraq. In his final act of duty, less than a month ago, he worked with other members of his unit to build a soccer field for Iraqi children. As he drove back to his base, an enemy bomb robbed him of his life. And today our nation grieves for the loss of Ronnie Tucker.

We remember two Navy SEALS -- Nathan Hardy of Durham, New Hampshire, and Michael Koch of State College, Pennsylvania. Nate and Mike were partners in the field and they were close friends in the barracks. Through several missions together, they had developed the unique bond of brotherhood that comes from trusting another with your life. They even shared a battlefield tradition: They would often head into battle with American flags clutched to their chests underneath their uniform. Nate and Mike performed this ritual for the last time on February the 4th -- they both laid down their lives in Iraq after being ambushed by terrorists. These two friends spent their last few moments on earth together, doing what they loved most -- defending the United States of America. Today, Nathan Hardy and Mike Koch lay at rest next to each other right here on the grounds of Arlington. 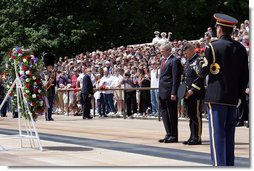 The men and women of American armed forces perform extraordinary acts of heroism every single day. Like the nation they serve, they do not glory in the devastation of war. They also do not flinch from combat when liberty and justice are embattled. Ronald Tucker, Nathan Hardy and Mike Koch make clear, they do not waver -- even in the face of danger.

And so today, here in Washington and across our country, we pay tribute to all who have fallen -- a tribute never equal to the debt they are owed. We will forever honor their memories. We will forever search for their comrades, the POWs and MIAs. And we pledge -- we offer a solemn pledge to persevere and to provide the security for our citizens and secure the peace for which they fought.

The soil of Arlington and other sites is filled with liberty's defenders. It is nourished by their heroism. It is watered by the silent tears of the mothers and fathers, and husbands and wives, and sons and daughters they left behind. Today we pray for God's blessing on all who grieve and ask the Almighty to strengthen and comfort them today and everyday.

On this Memorial Day, I stand before you as the Commander-in-Chief and try to tell you how proud I am at the sacrifice and service of the men and women who wear our uniform. They're an awesome bunch of people and the United States is blessed to have such citizens. (Applause.)

I am humbled by those who have made the ultimate sacrifice that allow a free civilization to endure and flourish. It only remains for us, the heirs of their legacy, to have the courage and the character to follow their lead -- and to preserve America as the greatest nation on earth and the last best hope for mankind. 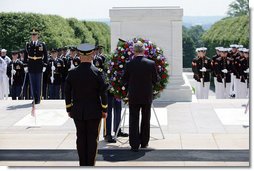 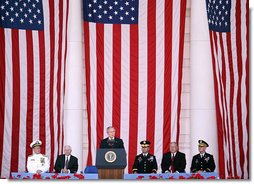