For Immediate Release
Office of the Press Secretary
May 26, 2008

THE PRESIDENT: I just welcomed five of our nation's university coaches to the Oval Office to thank them for going overseas to boost the morale of our troops. It was very interesting listening to them -- Charlie Weis is going to say a few comments about what they saw and heard. But I wanted them to know how much I appreciate going to say to these young men and women "thanks for what you're doing." 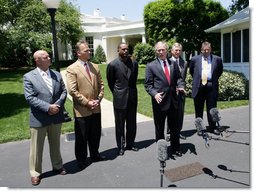 This is Memorial Day, it's a day to honor not only those who have died in combat, but it's to honor those who continue to serve. And these men make a living motivating young men on the football field, and I am absolutely confident that when our soldiers and sailors and marines and airmen and Coast Guard men and women met them that they inspired them.

And most importantly I'm confident what they heard was America appreciates what they do. We can't thank our troops enough for the sacrifices they're making on behalf of the nation. And so I want to -- I'm so grateful to you all for going and I'm really grateful that you expressed the gratitude of the American people.

Charlie, you may want to say a few things.

MR. WEIS: I think that Mr. President definitely had the inspired part right, but that inspire part definitely worked both ways. We went over there to help motivate the morale of the troops -- but I think we came home probably more inspired than even they were. I mean, it was just an unbelievable experience to watch the enthusiasm and the pride and the teamwork over there.

I mean, I can't -- we saw thousands and thousands of troops, and when they heard that we were coming to the White House on Monday, to a man and to a woman almost everyone said, "Could you just pass on one message to the President," and asked us to thank him for him supporting them. I mean, think about it -- they're there for four months, six months, a year -- it was just unbelievable -- from Germany, you know, seeing guys and girls that had gotten injured in battle; and their framework, their psyche; it was just an unbelievable experience.

And I think all five of us said we just wish we could have brought our players over there, you know, the 18-to-23-year-olds that we deal with, so they could see what maturity looks like at a young age and teamwork at its utmost. I tell you what, on behalf of all five coaches I can -- it was just an invigorating experience, one that we'll always treasure the rest of our lives.

And we got something special going on over there because there wasn't one person, of the thousands and thousands of soldiers we met, that had one negative thing to say -- and that's almost overwhelming to think about it; not one. Now, there were a couple at the end-of-their-year tours that were very much looking forward to getting their call to get home. But I'll tell you what, it was great. And what a perfect way to end up our trip, to end up at the White House on Memorial Day.

THE PRESIDENT: Thank you very much. Thank you all.