For Immediate Release
Office of the Press Secretary
May 25, 2008

THE PRESIDENT: It's been a pleasure of my presidency to get to know the leaders of Rolling Thunder. For our fellow citizens who don't know Rolling Thunder, Rolling Thunder is the moment in time here in Washington, on Memorial Day Weekend, when thousands of motorcyclers come to the nation's capital to pay tribute to those who have died in service, to those who sacrificed, and those who serve. And it's a magnificent sight. 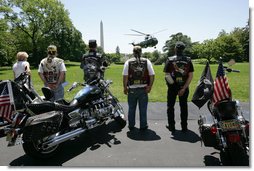 We just choppered in, Artie, and saw your brothers and sisters cranking up their machines and driving through the nation's capital -- many of them have got the flag on the back. And I am just so honored to welcome you back. I want to thank you and all your comrades for being so patriotic and loving our country as much as you do. I think this is the -- I don't know if this is the eighth time we've been together here, but it's pretty close.

THE PRESIDENT: Yes, one more. (Laughter.) Anyway, Artie is the main man and this is his board of directors who have continued to rally people around the country. I went to Greensburg, Kansas, Artie, and I came into a town that had been destroyed by a tornado -- I was going to give the high school graduation speech, and rode in from the airport and the motorcyclers were all lining the streets with the flags and it made me feel great. When people go to protest at the funeral of one of our brave soldiers that died in combat, Artie's folks are there to make sure that those protestors don't denigrate the moment.

So you're doing a lot for the country. 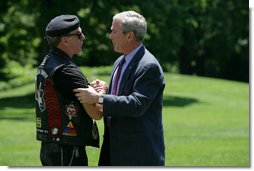 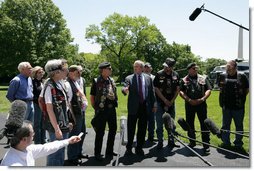