For Immediate Release
Office of the Press Secretary
May 21, 2008

THE PRESIDENT: Bienvenidos. Thanks for coming to mark this Day of Solidarity with the Cuban People. This is a day of pride, as we honor the culture and history of a noble nation. It is a day of sorrow, as we reflect on the continued oppression of the Cuban people. Most of all, this is a day of hope. We have hope because we see a day coming when Cubans will have the freedom of which they have dreamed for centuries -- the freedom that is the eternal birthright of all mankind. And many of you here are working to hasten this day -- and I thank you for your efforts. 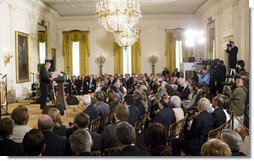 I particularly thank the members of my Cabinet who have joined us. Madam Secretary, thank you for coming and being a staunch friend of the Cuban people. (Applause.) Mi amigo, Carlos Gutierrez. (Applause.) Y tu familia. For those of you in Cuba who are listening to this broadcast I think it is important for you to know that Carlos is a Cuban American. He's now in the Cabinet of the President of the United States. All things are possible in a free society. (Applause.)

I appreciate the members of the Diplomatic Corps who have joined us. Thank you for being such good friends of the Cuban people. I want to thank the family members of Cuban dissidents who are here. Welcome to the White House, thank you for coming. (Applause.)

This time of year holds great significance for the Cuban people. One hundred and 13 years ago this week, Cuba lost its great poet and patriot, José Martí. And 106 years ago this week, Cuba achieved the independence for which Martí gave his life. José Martí knew that true liberty would come to Cuba only with a just government of it's people's choosing. He warned: "A regime of personal despotism would be even more shameful and calamitous than the political despotism [Cuba] now endures." 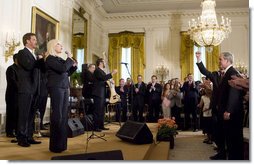 Martí's warning proved truer than anyone could have imagined. Today, after nearly a half-century of repression, Cuba still suffers under the personal despotism of Fidel and Raul Castro. On the dictators' watch, Cuba's political freedoms have been denied. Families have been torn apart. The island's economy has been reduced to shambles. Cuba's culture has been drained of artists and scholars and musicians and athletes. And like the once-grand buildings of Havana, Cuba's society is crumbling after decades of neglect under the Castros.

A few months ago, when Fidel handed over many of his titles to his brother Raul, the Cuban regime announced a series of so-called "reforms." For example, Cubans are now allowed to purchase mobile phones and DVD players and computers. And they've been told that they will be able to purchase toasters and other basic appliances in 2010.

There is another problem with the regime's recent announcements: It is the height of hypocrisy to claim credit for permitting Cubans to own products that virtually none of them can afford. For the regime's actions to have any impact, they must be accompanied by major economic reforms that open up Cuba's inefficient state-run markets, to give families real choices about what they buy, and institute a free enterprise system that allows ordinary people to benefit from their talents and their hard work. Only when Cubans have an economy that makes prosperity possible will these announcements lead to any real improvements in their daily lives.

Real change in Cuba also requires political freedom. In this area too, the regime has made grand commitments. One of Raul's first acts after receiving his new titles was to sign a major United Nations treaty on human rights. Yet when it comes to respecting human rights on the island, the regime has not attempted even cosmetic changes. For example, political dissidents continue to be harassed, detained, and beaten, and more than 200 prisoners of conscience still languish in Castro's tropical gulag. 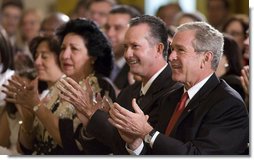 Recently, I received a letter from a man who spent 17 years in these dungeons. He described them as "dens of torture and pain and death." This is an undeniable violation of the U.N. treaty that Cuba just signed. If the regime views this document as anything more than a worthless piece of paper, it must immediately stop its abuse of political dissidents and release all political prisoners. (Applause.)

The world is watching the Cuban regime. If it follows its recent public gestures by opening up access to information, and implementing meaningful economic reform, respecting political freedom and human rights, then it can credibly say it has delivered the beginnings of change. But experience tells us this regime has no intention of taking these steps. Instead, its recent gestures appear to be nothing more than a cruel joke perpetrated on a long-suffering people.

America refuses to be deceived, and so do the Cuban people. (Applause.) While the regime embarrasses and isolates itself, the Cuban people will continue to act with dignity and honor and courage. In Cuba, advocates of liberty use this week to honor the political prisoners who have sacrificed for the cause of freedom -- like a brave writer named Pedro Luis Boitel. (Applause.) On May 17, 1972, while on a hunger strike in prison, Boitel said: "They can kill and destroy my body, but never my spirit. This [they] can never bend." Eight days later, Boitel died. He was 41 years old.

We see the same unbending courage in Cuba's political prisoners today. We see it in a man named Luis Enrique Ferrer García. Luis Enrique is a peaceful pro-democracy advocate who was rounded up during the 2003 Black Spring. Luis Enrique received the longest sentence of all those arrested during the crackdown, condemned to 28 years in the Castros' prisons. At times, this brave man has been trapped in a dark cell too small for him to stand. He suffers from high blood pressure, and severe gastrointestinal illnesses. As his health obviously deteriorates, he has little access to his family. 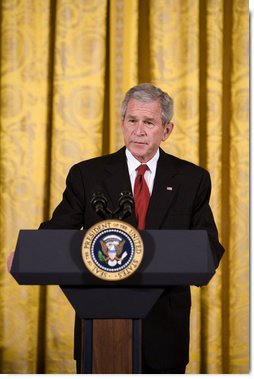 We see this courage in a doctor named Oscar Elias Biscet. Dr. Biscet is a healer, a man of peace, and a determined activist for human rights. For all this, Dr. Biscet serves a 25-year sentence under the worst conditions. He was once put into solitary confinement for nearly eight months, trapped in a small, dark, underground cell. He lost nearly 50 pounds and has lost almost all of his teeth. He is in poor health. He is allowed very few visitors.

We see this courage in Cuba's Damas de blanco. Every Sunday, these "Ladies in White" march in silent protest, demanding the release of their loved ones. A few weeks ago, when about a dozen of these women held a peaceful sit-in at a public park, they were dragged from the area by a large pro-regime mob. One of the women was Berta Soler, whose husband, Juan Angel Moya Acosta, is serving a 20-year sentence. Earlier this month, Berta told me personally: "Despite the torture, Cuba's political prisoners will not give in."

Recently, a former political prisoner asked me to remember his brothers languishing in Castro's jails. Through this Day of Solidarity with the Cuban People, we honor that request by speaking the names of Cuba's prisoners of conscience. They include the men I have just mentioned. They include others such as: Ricardo Gonzalez Alfonso, Jose Luis Garcia Paneque, Normando Hernandez, Jorge Luis Gonzalez Tanquero, and Ariel and Guido Sigler Amaya. They include other names that many of you keep in your hearts and in your prayers.

This is the first Day of Solidarity with the Cuban People -- and the United States must keep observing such days until Cuba's freedom. We'll continue to support the Cubans who work to make their nation democratic and prosperous and just. Since 2001, the United States has dramatically stepped up our efforts to promote freedom and democracy in Cuba. This includes our increased efforts to get uncensored information to the Cuban people, primarily through Radio y TV Marti.

Today, I also repeat my offer to license U.S. NGOs and faith-based groups to provide computers and Internet to the Cuban people -- if Cuban rulers will end their restrictions on Internet access. And since Raul is allowing Cubans to own mobile phones for the first time, we're going to change our regulations to allow Americans to send mobile phones to family members in Cuba. If Raul is serious about his so-called reforms, he will allow these phones to reach the Cuban people. (Applause.)

Through these measures, the United States is reaching out to the Cuban people. Yet we know that life will not fundamentally change for Cubans until their form of government changes. For those who've suffered for decades, such change may seem impossible. But the truth is, it is inevitable.

Today, 113 years after José Martí left us, a new poet-patriot expresses the hopes of the Cuban people. With us this morning is songwriter Willy Chirino. Willy will perform a song that is on the Cuban people's lips and in their hearts. And here are some of its lyrics: Nuestro día ya viene llegando.

As I mentioned, today my words are being broadcast directly to the Cuban people. I say to all those listening on the island today: Your day is coming. As surely as the waves beat against the Malecón, the tide of freedom will reach Cuba's shores. Until it does, know that you are in our prayers. And know that the Author of liberty hears those prayers, y que, con su ayuda, veremos a Cuba libre. Gracias, y que Díos los bendiga. (Applause.)