For Immediate Release
Office of the Press Secretary
May 21, 2008

THE PRESIDENT: I want to thank the members of Congress who've joined us as I sign the Genetic Information Nondiscrimination Act, a piece of legislation which prohibits health insurers and employers from discriminating on the basis of genetic information. In other words, it protects our citizens from having genetic information misused, and this bill does so without undermining the basic premise of the insurance industry. 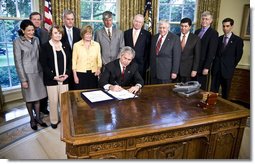 I also want to pay homage today to -- and not only to members of the Congress who are behind me, but also to Senator Ted Kennedy, who has worked for over a decade to get this piece of legislation to a President's desk. All of us are so pleased that Senator Kennedy has gone home, and our thoughts and prayers are with him and his family.

Now it's my honor to sign the Genetic Information Nondiscrimination Act.

(The Act was signed.)