For Immediate Release
Office of the Press Secretary
May 18, 2008

PRESIDENT BUSH: Mr. Prime Minister, thank you for coming. It's the first time we've had a chance to visit, and I appreciate the very candid discussion we had. I appreciate the fact that you're committed to working to make sure that relations between the United States and Pakistan are strong and vibrant and productive.

And one area where our relations can be productive is we cooperate on economic matters, because the truth of the matter is, in a population that has got hope as a result of being able to find work, is a population that is going to make it harder for extremists and terrorists to find safe haven. 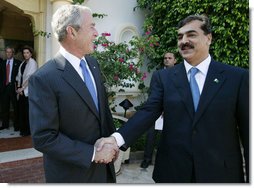 And so I appreciate very much our candid discussion about the economy. I fully understand that you're dealing with serious food prices. I appreciate the compassion you showed for the people of Pakistan. I told the President -- the Prime Minister that one thing we can do, having talked to the President of Afghanistan, is help Afghanistan grow wheat, help Afghanistan become self-sufficient, which will take the pressure off of the people of Pakistan.

The Prime Minister and I talked, of course, about our common desire to protect ourselves and others from those who would do harm. And I want to thank your steadfast support and your strength of character and your understanding of the problems we face. Relations are good between our two countries and they will continue to be good. And I want to thank you for coming and to -- and advancing those relations. Welcome.

PRIME MINISTER GILANI: Thank you. Thank you very much, Mr. President, for this opportunity. I want to take your call to confidence that, with the change of the new government in Pakistan, with a new democratic government in this country, there's a change for the system. And I've been unanimously elected as the Prime Minister of Pakistan; that's the first time in the history of Pakistan. And we have discussed in detail on a few issues like economics, like the food problems, like the energy problems.

Therefore I pledge and I stand by the world to fight against extremism and terrorism. I appreciate the support of Mr. President for our concerns on both social sectors, economic sectors, energy sectors, and we want to work together on all these issues. And I once again thank Mr. President for extending this opportunity.