For Immediate Release
Office of the Press Secretary
May 18, 2008

PRESIDENT BUSH: I just had a discussion with the Vice President, the Deputy Prime Minister, Foreign Minister, of the sovereign nation of Iraq. And I told them that I'm impressed by the progress that's taking place, the security progress. We talked about Basra and the success of the Iraqi government in Basra in dealing with Shia extremists. 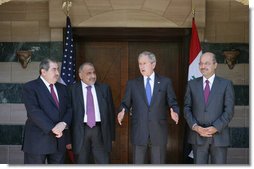 We talked about the economic progress that is being made. We also talked about the fact that more work needs to be done; that this is -- you know, there are still problems. But the good news is, is that these three leaders recognize the problems, and they have got solutions to deal with the problems.

And finally we talked about the need for the people in the Middle East to understand the importance of a successful Iraq. And these three men are courageous men; they're smart, capable people who are -- who represent the Iraqi people with a lot of dignity.

And I welcome you here, Mr. Vice President. Thank you for coming.

VICE PRESIDENT ABD AL-MAHDI: Thank you, Mr. President. We had a very good meeting with President Bush, who always supported Iraq. And we assessed the progress that we did on all levels -- security, politics, even economical progress. It's a regular relationship and the international community (inaudible) progress has been marked all of the -- on those levels.

We also assessed the future, what we should do in the future -- economical relationship and other issues of economic kind and also the region issue.

So we are working together, really, Iraq and the United States. And we were always optimistic even in the worst days, and we now, today, we realize how -- the importance of our work, of the cooperation between the United States and Iraq, and see it continue; continue that.

PRESIDENT BUSH: Thank you, all.