For Immediate Release
Office of the Press Secretary
May 17, 2008

We talked about two issues primarily. First, I do want to discuss Lebanon. The President is deeply concerned about Lebanon, the fate of the Siniora government, as am I. We're concerned about radical elements undermining the democracy. It is clear that Hezbollah, which has been funded by Iran, can no longer justify its position as a defender against Israel when it turns on its own people. This is a defining moment; it's a moment that requires us to stand strongly with the Siniora government and to support the Siniora government. And the President was quite articulate about his concerns -- and I appreciate you sharing your strategy with me. 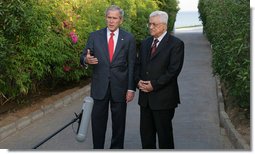 And then we talked, of course, about the Palestinian state. I told the President that I am absolutely committed to working with he and his negotiators, as well as the Israelis, to get a state defined. And I do so for a couple of reasons. One, it breaks my heart to see the vast potential of the Palestinian people really wasted. They're good, smart, capable people that when given a chance will build a thriving homeland. It'll be an opportunity to end the suffering that takes place in the Palestinian Territory.

And the second reason I am for it is because it's the only way for lasting peace. The President and his team are committed to peace. They stand squarely against those who use violence to stop the peace process. And for that I admire you and your team, Mr. President, and I commit to you once again that our government will help achieve a dream, a dream that you have -- and the truth of the matter is, a dream that the Israelis have, which is two states living side by side in peace.

So thank you for coming, appreciate it.

PRESIDENT ABBAS: (As translated.) Mr. President, thank you very much for receiving us today. Of course we have talked about the peace process and the negotiations that are taking place these days between us and the Israeli side. We know very well that you, personally, as well as your administration, are committed to reach peace before the end of 2008. Therefore, we are working very seriously and very aggressively with the hope that we will be able to achieve this objective before the end of the year.

We have talked with the President about the details of the negotiations that are taking place between our side and the Israeli side. And of course we also talked about a wide range of issues that affect the entire region, but also affects the Palestinian people. Because it is very important for us that the entire Arab region will be living in stability in order to be able to achieve peace in our Palestinian Territory.

We are very delighted that the President is following all the details of everything and every discussion that is taking place in the Palestinian negotiations, as well as issues in the region. 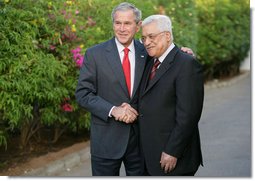 Therefore, we're delighted to continue our engagement with you, Mr. President, in order to be able to achieve all the objectives, which are ours and yours at the same time.