For Immediate Release
Office of the Press Secretary
May 17, 2008

PRESIDENT BUSH: Mr. President, good to see you, thanks. President Karzai and I have had a lot of meetings together, and this was a very upbeat meeting, and I want to thank you for coming. I appreciate your courage. Appreciate you taking on a very tough assignment -- which is helping your young democracy survive amidst the threats from the radicals and extremists. 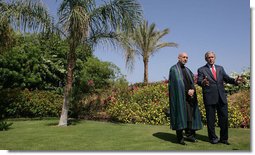 I really appreciate the briefing you gave me on how you're going to approach the Paris donor's meeting. This is a great opportunity for the world to help Afghanistan grow and prosper. His strategy is a smart strategy. And part of his strategy is to -- is for the world to help Afghanistan's agricultural community grow and prosper, so that they can not only become self sufficient in food but become net exporters of crops that people need in order to be able to eat and survive.

And so I thought it was a smart approach. I hope the world rallies to your behalf. We'll certainly help. I appreciate you being here.

I told you about a story earlier, that we for the first time, after 30 years, were able to give diplomas to the graduates of Afghanistan's universities, the medical colleges, economics, law and all that. That would have not been possible without your help and the help of the rest of the world. And thank you very much for the support on Paris. We'll be going to Paris to ask for more help for Afghanistan's agriculture, so that Afghanistan can become self-sufficient in agriculture, and also be an exporter to the rest of the world. And we'll be asking for help on energy resources in Afghanistan, and better irrigation and (inaudible) projects.

Afghanistan once again thanks the people of the United States. Mr. President, thank you very much, and please convey that gratitude to the American people. And please do visit us very, very soon. The Afghan people want to be there to greet you and to express the gratitude for your leadership and help.

Q Mr. President, Egypt's state-owned media says that you have tilted too far toward Israel. One of them, the newspaper, says that you aim to do nothing but appeasing Israel. Did you encounter that attitude today, and what do you say to this?

PRESIDENT BUSH: Actually, in my meeting with the President of Egypt, he wanted to make sure that my approach toward the Middle Eastern peace is firm, and that we work hard to get the Palestinian state defined. And in my speech tomorrow, I'll make it clear that I believe we can get a state defined by the end of my presidency, and we'll work hard to achieve that objective. I had conversations with Prime Minister Olmert and others in his government to that effect; I'll have conversations with President Abbas and people in his government tonight.

Q Mr. President, can you talk a little bit more about your meetings with officials in Saudi Arabia? And are you satisfied with the response that they gave you on oil?

PRESIDENT BUSH: Look, my -- His Majesty is -- he kindly called in the Energy Minister, who I think was in Korea, and the man flew back to talk with us. I said very plainly, I said you've got to be concerned about the effects of high oil prices on some of the biggest customers in the world. And not only that, of course, high energy prices is going to cause countries like mine to accelerate our move toward alternative energy.

And as the minister said yesterday, that Saudi Arabia this year has increased the number of barrels of oil per day by 300,000 a day, and they're increasing refining capacity, which is not enough -- it's something, but it doesn't solve our problem. Our problem in America gets solved when we aggressively go for domestic exploration. Our problem in America gets solved if we expand our refining capacity, promote nuclear energy, and continue our strategy for the advancement of alternative energies, as well as conservation.

And one of the interesting things about American politics these days is those who are screaming the loudest for increased production from Saudi Arabia are the very same people who are fighting the fiercest against domestic exploration, against the development of nuclear power, and against expanding refining capacity. And so I was pleased that they had increased production by 300,000 [barrels], but I'm also realistic to say to the American people, we've got to do more at home. And we need a Congress who will be responsive to those requests.

Thank you all very much for your interest.