For Immediate Release
Office of the Press Secretary
May 15, 2008

THE PRESIDENT: Thank you all for coming. Never a man to shy away from a microphone. (Laughter.) Didn't realize it gets so cold here in Jerusalem in May. Yes, but thanks for coming.

I first want to thank James Snyder and the museum folks for hosting this fantastic reception. (Applause.) Mr. President, thanks for joining us, and Mr. Prime Minister, I'm so honored that you all would take time to be here, as I am. Members of your cabinet, members of the Knesset. We've got leaders from around the world who are here to share in this fantastic celebration. Laura and I really wanted to come by and say thanks to our fellow Americans for coming as well. (Applause.) 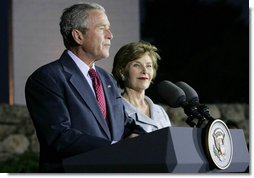 So I'm driving in the limousine, waving at friendly faces, half of whom seem to be from California or -- (laughter.) I hope you're having as much fun as we are. It's been a -- it's been such a fantastic couple of days for us. And what a fitting way to end with our buddies from the United States of America. You know, Israel has got no closer ally than America, and one of the reasons why is because of the connections between citizens of the U.S. and the citizens of Israel.

And so we're thrilled to be with you. We're also honored to be steps away from some of oldest Biblical texts. I don't know if you've had a chance to go through the museum. I strongly urge you to do so -- if they open it up for you. (Laughter.) But these documents tell the story of the righteous -- of a righteous God and his relationship with an ancient people. There's no doubt in my mind that the patriarchs of ancient Israel and the pioneers of modern Israel would marvel at the achievements of this nation. And if you really think about it, I doubt few of the prognosticators would have projected Israel to be what it is today: a modern, thriving democracy in the heart of the Middle East. It's been an amazing transformation -- of dry valleys to fertile lands. And the new technologies being nurtured here are a great testimony to the truest resource of the Israeli people, and that's the brain power and ingenuity and drive.

I gave a speech today in the Knesset. It was such an honor to stand in that hallowed hall. (Applause.) One of the things I wished I would have projected maybe more clearly was the fact that this is a land of courageous people -- people who have had to withstand bombings and suiciders, but never lost faith; people who have shown incredible resilience. And it's a nation worthy of our support, and a nation worthy of our friendship.

As I said in my speech, I'm -- I truly believe that if we stay firm in our resolve, resist the temptation to give in to the terrorists, and believe in the transformative capacity of liberty, someday other nations in the region will share the blessings of democracy and liberty. Someday they'll know that they'll have governments that respond to the people. They'll build schools instead of bombs. They'll not want a war with their neighbors -- but want to live in peace. And that's the dream, and that's the hope. And I firmly believe it can come true.

I do want to pay tribute to one brave soul, and that is Liviu Librescu. I don't know if you remember him, but he was a teacher at Virginia Tech. His folks live in Israel. I bring him up because it was a courageous act of selflessness -- he blocked the doorway to his -- to his classroom with his body to allow his students to escape. And I think it's a fitting final statement here in Israel for me to make, to say that, isn't it amazing that a survivor of the Holocaust gave his life for others in the Virginia countryside. And I just want his family to know that we appreciate his courage, and that his legacy lives on.

And so, thanks for coming. Thanks for honoring a great nation and a worthy friendship. I'm proud to be here on Israeli soil as the President of the United States of America. I'm proud to carry our banner of liberty around the world. And I'm proud to proclaim our deep desire for peace.