PRIME MINISTER OLMERT: I'm delighted to honor President George W. Bush on his second visit. This time the President came to celebrate with Israel the 60th anniversary of the state of Israel.

We are particularly excited by the fact that the President chose to come this week, which is a very meaningful and very exciting week in his private life. And I congratulate you again, President, for the marriage of your daughter, Jenna, this last weekend. We are very happy to host you here. 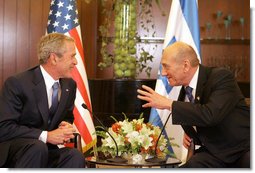 We had a long discussion about a variety of issues. The first of the issues was the attempts made by Iran to acquire nuclear capabilities. This is a danger of the highest order to the safety of the region -- of course, Israel is part of it, and many other countries in the world. And there is an international effort, led by the United States of America, to try and stop Iran from acquiring nuclear power. And the discussions between our two countries will continue on this issue, and of course Israel will try to join the main forces led by the United States of America and the President to try and stop the Iranians from continuing their efforts, which are going on and which are clearly dangerous and threatening for the stability of the world.

We also discussed the situation in Gaza. A couple of days ago I had a visit of General Omar Suleiman, the head of the Egyptian military intelligence, and we discussed possible terms for what may emerge as a cease-fire in the Gaza district. The fact is that while General Suleiman was visiting here, Qassam rockets were still shot at innocent people in the south of Israel, and two people were killed, and this is a very threatening signal. An organization which pretends to want to stop terror can't continue to shoot at innocent people. We will make exceptional efforts that we will not explain, but Israel naturally will not be able to tolerate continuous attacks on innocent civilians.

We hope that we will not have to act against Hamas in other ways with the military power that Israel hasn't yet started to use in a serious manner in order to stop it. But it entirely depends on responding positively to the principles set forth by me and by the Israeli cabinet in order to stop these operations.

We also briefed the President on the negotiations between us and the Palestinians. We are genuinely interested in meeting the time framework that we talked about in Annapolis. I still remember the very eloquent presentation of President Bush prior to the public meeting in Annapolis, in which he described the difficulties, the sensitivities, the complexities, and also the opportunities that the Annapolis process proposes for both sides. The Israeli side is making an exceptional effort on all fronts. We need to reach an understanding that will define accurately the parameters for the realization of the vision of you, Mr. President, of a two-state solution that will relate to the issue of borders, to the issue of refugees, to the issue of the security arrangements, and will set forth also, at the end of the day, the framework for how to deal later with the issue of Jerusalem.

We will continue this discussion, and I'm sure that America will continue the extraordinary efforts made by Secretary Rice and President Bush to try and influence the process so that it will end up in a positive way.

Again, this is not just a ceremonial visit. I thank you, Mr. President, for your friendship, for your dedication to the basic principles which are shared by our two countries, and for your great friendship. You're a great person, you're a great leader, and you're a great friend. And it's a great honor for me to have the opportunity to host you in the home of the Prime Minister of the state of Israel on the 60th anniversary of the state of Israel. Thank you very much.

PRESIDENT BUSH: Mr. Prime Minister, thank you for your friendship, and thank you for your hospitality. Laura and I are looking forward to having dinner with you and Mrs. Olmert tomorrow night, as well as the celebrations tonight and tomorrow.

I'm honored to be representing our country here for the 60th anniversary of the existence of the state of Israel. It's just a great honor, and it's a chance for me to express the enduring friendship of the American people with the Israeli people. It's also an interesting time to come because, you know, here we are in the heart of a thriving democracy and yet that democracy, as are other democracies, are being challenged by extremists and terrorists -- people who use violence to try to advance their dark vision of the world.

What's interesting -- what took place in Lebanon is that Hezbollah, the so-called protector of the Lebanese against Israel, has now turned on its own people. And as you mentioned, Hezbollah is supported by Iran. This is an Iranian effort to destabilize that young democracy, and the United States stands strongly with the Siniora government.

And so I thank you very much for your efforts to describe what's possible for the millions of Palestinians who simply want to live side by side with Israel in peace. We've had a -- an extensive discussions on a variety of issues, and there's no better person to discuss those issues with than you. You clearly see the threats. You clearly see the opportunities. And I want to thank you for your strong leadership, and thank you for your friendship.