PRESIDENT PERES: Mr. President, Secretary of State, distinguished delegation, I got permission from the Americans to be -- and Tzipi Livni, our Foreign Minister. I got permission to be all my life an optimist. And you bring with you optimism, so I feel a sort of competition. (Laughter.) But let me say that I know you have elections sometimes, by the end of this year, and maybe there will be a change of administration, a change of guards, I think before you will leave office you will see a change of guards here in the Middle East. 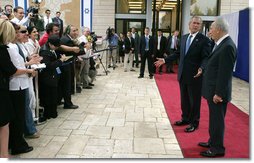 What looks today so gloomy may be the last effort by some very extremist group to remain alive, because it's concentrated, it becomes sharp and clear, particularly in two places. In Lebanon, Hezbollah is simply destroying Lebanon. It's a matter that concerns not only the United States or Israel, it concerns the Arab world. For them, the destruction of Lebanon is the destruction of statehood in many other places. And it's a protest without a message. And the second goes to Gaza, where Hamas is responding to the establishment of a Palestinian state. I think you, and may I say the Secretary of State, invested so much effort to enable the Palestinians to correct the historic mistakes from 1947, because would they then accept an Arab state, we wouldn't have all these troubles. But never the mind, we cannot change the past.

But today the real obstacle, when I consider everything else before creation of the -- the (inaudible) declaration of a Palestinian state is Hamas. And talking with the Palestinians I know that's their view. We are not their enemies, as we are not enemies of Lebanon. On the contrary, I think we would like to see a united, integrated Lebanon, living in peace, who don't have any ambitions neither to their water, nor to their land, nor to their politics. We would like to see the Palestinians living together with such (inaudible) of their life, the separation is a tragedy for them and for the rest of us.

Now the Arab world will have to take a stand, not about the conflict between us and them, but about their own destiny, where are they moving. And that will affect us.

Your eight years were very moving years, for all of us --

PRESIDENT PERES: -- (inaudible), that you can really watch a friendship without any bad mood. And I know that you are not a simple messenger. (Laughter.) But you never interrupted your understanding, your support --

PRESIDENT PERES: -- and really trying to do whatever you, your administration and the lady who is on the State Department really did then to help us negotiate a difficult time.

So for us, it's a celebration not only because we're a little bit older -- 60 years, it's not too much -- but also because we feel that our efforts are not in vain. And it is in this optimistic view I welcome you here.

PRESIDENT BUSH: Mr. President, it's great to be with you. You're known as a wise soul, and your comments reflect your wisdom. I am delighted to be here for the 60th birthday party. As a person who is 61 years old, it doesn't seem that old. (Laughter.)

But I suspect if you looked back 60 years ago and tried to guess where Israel would be at that time, it would be hard to be able to project such a prosperous, hopeful land. No question people would have said, well, we'd be surrounded by hostile forces -- but I doubt people would have been able to see the modern Israel, which is one reason I bring so much optimism to the Middle East, because what happened here is possible everywhere.

And the objective of the United States must be to, one, support our strongest ally and friend in the Middle East -- the only true democracy against the forces of terror that you just described, and at the same time, talk about a hopeful future.

So I'm really looking forward to my time here. I want to thank you for giving me a chance to speak to the Knesset. I hear it's quite an experience. It'll be a huge honor to represent my country for your 60th birthday. In the meantime we will continue to work toward a vision of -- where people who are just reasonable and want a chance to live in peace with Israel have that opportunity, and at the same time speak clearly about the forces of terror who murder innocent people to achieve their political objectives, and how the world must stand against them.

And so I want to thank you for giving me a chance to come by and see you again -- and you're looking good. (Laughter.) I hope you're feeling well.

PRESIDENT PERES: Thank you very much.