For Immediate Release
Office of the First Lady
May 12, 2008

MRS. BUSH:  Thank you, John, very much, for telling us about Preserve America, and for that very kind introduction.  And thanks to each of you who are here today for the work that you're doing to preserve our national treasures. 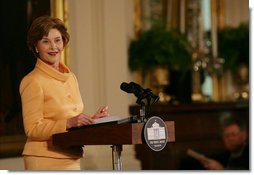 You can tell from everyone I just introduced that this is really a multi-agency effort to make sure we can protect our historical and cultural sites all across the United States.

Today, we honor four strong efforts to preserve our national historic sites and to interpret them so that they're relevant to the lives of the communities around them.

Our first award recipient is the African Burial Ground project, which has uncovered the near-forgotten stories of some of New York's first arrivals.  This site was discovered by the U.S. General Services Administration during an excavation for a new federal building in 1991.  It served as a burial ground during the 17th and 18th centuries for thousands of Africans brought in captivity to America by Dutch settlers.

Today, the African Burial Ground has been transformed into a national monument that teaches visitors about the important role that enslaved and free Africans played in the building of New Amsterdam, which later became New York.  Nestled between skyscrapers in Lower Manhattan, a memorial honors the memory of those interred at the site, and a visitors center imparts information gleaned from the study of what has been found at that site.

Congratulations and thank you to the participants in this project for giving Americans new ways to learn about the African presence in colonial New York.  (Applause.)

Our second award honors the preservations of another New York City organization -- the Lower East Side Tenement Museum.  Between 1863 and 1935, the building that now houses the Tenement Museum housed an estimated 7,000 immigrants from more than 20 countries.  Today, the Tenement Museum tells the stories of these immigrants' lives through six restored family apartments.

The Museum also reaches into its community with book club discussions and free English classes.  It invites present-day immigrants to participate in "Shared Journeys" that link their experiences to those of immigrants past.

Congratulations to the Tenement Museum for helping preserve the immigrant heritage that shapes our country.  (Applause.)

A third award goes to the Corinth and Alcorn County Mississippi Heritage Tourism Initiative.  This initiative began as a targeted effort to save a plot of Civil War earthwork.  It's since involved into a community-wide project leading to the preservation of around 800 acres of Civil War battlefields and the opening of a state-of-the-art interpretive center to explain these sites.

In addition, private and public organizations have worked together to revitalize downtown Corinth and secure its designation as a National Register Historic District.  Dozens of buildings and homes have been restored; the city has installed period lighting, streets, and sidewalks; and hiking and bike trails that link these historic sites.

Congratulations to the city of Corinth and Alcorn County for working as a community to create a cultural destination that now attracts people from across America.  (Applause.)

Our final award recipient is the Historic Courthouse Preservation Program from my home state of Texas.  Texas county courthouses represent some of our state's most impressive architecture.  But in 1998, the National Trust for Historic Preservation listed these buildings as one of America's most endangered historic places.

Since then, the Texas Historic Courthouse Preservation Program has worked with counties throughout Texas to complete the full restoration of 36 courthouses to date, with 16 more full restoration projects underway.   More than half of Texas's 234 surviving historic county courthouses are now participating in this state-run program.

Congratulations and thank you for your good work.  (Applause.)

Each of these initiatives show that the successful preservation of historic sites depends on participation from the communities that house them.  So today, we're pleased to announce a new component of the Preserve America initiative -- the "Preserve America Stewards."  This program will recognize organizations that successfully use volunteers to help care for America's cultural heritage.  It was inspired by existing programs in the Southwestern United States.

The Southwest Colorado Cultural Site Stewardship Program, for example, trains volunteers to monitor more than 110 archaeological sites.  And the Arizona Site Steward Program has trained a network of volunteers across the state to monitor cultural resources and to share the important work of preservation.

By encouraging the work of organizations like these, the Stewards program will help protect our nation's cultural and natural resources and give more Americans a personal stake in bringing history to life.   The application process for this new program opens today.  (Applause.)

In addition, Congress is considering legislation that would authorize Preserve America and another important initiative -- Save America's Treasures, which provides grants to rescue individual landmarks and artifacts.  I urge the Congress to pass this bill quickly to help ensure that these initiatives become a permanent part of our federal preservation effort.

Thanks to each of the organizations represented here for the work you do to preserve our nation's important historical landmarks.  For your exemplary accomplishment in preservation, education, and heritage tourism and demonstrated commitment to honoring America's past, I congratulate you on being named recipients of the 2008 Preserve America Presidential Awards.  (Applause.)