For Immediate Release
Office of the Vice President
May 8, 2008

THE VICE PRESIDENT: Thank you very much. Thank you, Betty. It's good to be with all of you, and to have an opportunity to look around this facility this morning. Let me thank Betty for her words of introduction, and I thank all of the employees of the Philadelphia Regional Financial Center for the work you do, and to make possible our visit here today.

I was at the house -- the White House early this morning, and the President knows that I'm visiting this check-writing facility today. He asked me to send his best wishes to each and every one of you. Right now he's on his way to Texas for his daughter's wedding this weekend. So you can bet he'll be writing a few checks, too. (Laughter.) 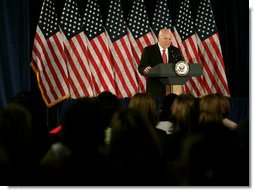 Both the President and I have great respect for the men and women who work here, and in places like this, facilities like this, all across the country. It's one thing for Congress to pass a bill and for the President to sign it into law. It's another to fire up the presses and to print millions of checks to go out to American citizens. That's where all of you come in. This is the first day for mass production of those rebate checks under the Economic Stimulus Act of 2008 -- and the largest number of those checks will be printed right here in Philadelphia. You're more than up to the task. And I want you to know we appreciate your efforts, as well as your standards of accuracy, efficiency, and speed.

In Washington, D.C., we spend a lot of time debating the issues. The American people expect us to do that. But they also expect us to act when action is required -- and too often, the partisan divisions in Washington get in the way, and cause important work to be left undone. But today we mark a different kind of outcome -- an achievement that reflects credit on both political parties, and whose good effects should extend far into the future.

Early this year, with signs of an economic slowdown, President Bush moved quickly with a request to Congress for an economic growth package. The best way to reignite the economy, he said, was through quick, substantial, across-the-board tax relief that put money directly in the hands of workers and entrepreneurs. Members of Congress agreed -- and in just a few weeks' time, Democrats and Republicans came together to produce the Economic Stimulus Act. Under the law, more than $150 billion will be returned to the taxpayers, in amounts up to $600 per person, $1,200 per couple, and $300 for each child in the family. The law also provides important incentives for employers to make new investments that will help create jobs. 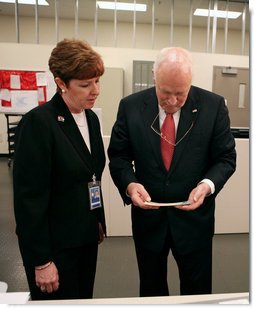 The timing of the tax relief could hardly be better for the working people of America. Everyone is paying more these days to fill up the gas tank and to put food on the table. An extra $600 or $1,000 will come in handy anytime, but especially when the family budget is tightened up by higher prices.

The timing is excellent as well for the economy. The benefit of individual tax relief, multiplied by millions nationwide, should be an economic lift that's felt in every corner of our economy. When all the checks have arrived, some 128 million households will have greater spending power -- and the benefits, economists believe, will be felt not just in the current quarter, but also through the summer months. By then, the economic picture should be brighter, because we've put a sensible policy in effect -- and because we've done so without delay, thanks to all of your efforts.

No one can tell the future for certain. By the same token, to expect positive results from tax relief is more than just speculation. It's a matter of experience.

When President Bush and I took office seven years ago, the economy was sliding toward recession, and some were predicting a sharp downturn after the bursting of the dot-com bubble. We acted promptly -- and within about six months of the President's inauguration, tax rebate checks started going out to millions of Americans. Also in that first year, we reduced income tax rates across the board, we increased the child credit, again phasing out the marriage penalty and the death tax, and later, reduced the tax rates on capital gains.

We now know just how great an impact that sustained tax relief has had on the economy. Thanks in part to the President's low-tax policies, the slowdown that did come was a fairly mild one. With a low-tax policy firmly in place, America returned to the path of healthy growth, and was able even to overcome every challenge that came -- including the enormous negative economic consequences of 9/11. For the better part of six years now, America's economy has grown without pause. This nation of free men and women has added more than a trillion dollars of value to our gross domestic product. And new jobs were added in each of 52 consecutive months -- the longest uninterrupted period of rising employment ever recorded in the history of the country. 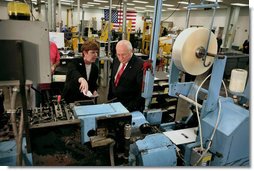 Now, with the economy again needing help finding its footing, Americans have every right to be confident of the road ahead. And the reason for that is simple to state: We know what works. Our country has produced the most creative, enterprising, resilient economy on the face of the earth. Every time we put the needs of the people ahead of the appetites of government, every time we reward hard work, investment, and risk-taking, the economy moves forward, the nation grows stronger, and more Americans see their own dreams come true.

For those of us who make policy, this is no time to rest from our labors. The task of good economic stewardship goes on, and the list of unfinished business is long. Our administration has already taken steps to help Americans worried about meeting their mortgages. We're asking Congress to join the effort by passing measures to improve the Federal Housing Administration, and to reform the regulatory structure of Fannie Mae and Freddie Mac. Congress can also do more to generate growth and jobs by passing new free trade agreements, particularly with countries here in our own hemisphere.

Perhaps above all, members of the House and Senate need to recognize that much of the tax relief that's been provided in this past decade is set to expire in just a few years. Without action by Congress, the death tax will suddenly reappear, at rates that top out at more than 50 percent. Taxes would go up on capital gains and dividends. The tax rate for every single income tax bracket would be increased. For taxpayers in the lowest bracket, the rate would increase by 50 percent. And the per-child tax credit would drop from $1,000 to just $500. The overall effect would be an average increase of $1,800 a year in the tax bill of some 116 million Americans.

Such a tax increase would, obviously, put heavy downward pressure on the economy's ability to grow. Even the expectation that such a tax increase might happen will start having a negative effect on the decisions that taxpayers, entrepreneurs, investors will be making. That makes it all the more urgent for the Congress of the United States to end the uncertainty and put this economy on a sturdy foundation -- by making the tax cuts permanent.

Before long, I believe the tax rebates now underway will help strengthen the case for permanent tax relief. We're giving the American economy a shot of energy at the right time, and in the right way. And in the months to come, the American people will once again prove why our economy remains the envy of the world. 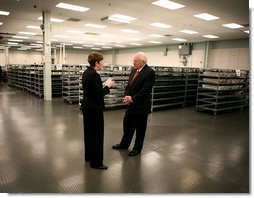 As of today, well over seven million Americans have already received their rebates by electronic deposit. And starting today, at this facility, the checks will start printing at the rate of a thousand every minute. It's a great day for the American people, and the President and I appreciate all the hard work that you put in to make it possible.