For Immediate Release
Office of the Vice President
May 8, 2008

Vice President's Remarks at a Reception Celebrating the 60th Anniversary of the Founding of the State of Israel
Andrew W. Mellon Auditorium
Washington, D.C.

THE VICE PRESIDENT: Thank you very much. Mr. Ambassador, Senator Lieberman, distinguished guests, ladies and gentlemen: good evening to all of you. It is indeed a pleasure to join this impressive gathering as we mark the 60th Anniversary of the modern state of Israel's founding, reaffirming the warm relationship between our two countries, and to honor the memory of a man who is a hero to both Israel and America, Colonel Mickey Marcus. (Applause.) 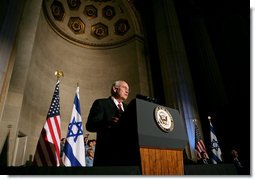 It's also my privilege, on this happy occasion, to bring warm personal regards from the President of the United States, George W. Bush. (Applause.) I know the President would like to be here as well, but he's in Texas with the family -- and in two days we'll all congratulate him as the father of the bride. (Applause.)

Israel has never had a better friend in the White House than the 43rd President of the United States. (Applause.) Today also happens to be the birthday of the 33rd President, Harry Truman, who was living in the White House 60 years ago. As the historical record makes clear -- (applause) -- President Truman encountered a good deal of resistance inside his own administration when he showed an inclination to recognize the new Jewish state. Up until even the hours before independence was announced, no one was really sure what kind of official response America would make. But Harry Truman was not the sort to wring his hands and to leave an important matter unresolved. So at his direction, only 11 minutes after the announcement was made in Tel Aviv, the United States of America recognized the state of Israel. (Applause.)

At that moment, a special bond was formed between our two countries -- and that bond has only grown stronger and more meaningful over time. Our nations were both founded by courageous, peace-loving people -- devoted to the ideals of liberty and justice, and humble before Almighty God. The United States and Israel have persevered through many difficulties, and the tests of history have found us ready. As fellow democracies, we cherish a friendship based on shared principles, a shared commitment to the safety of our peoples, and a deep willingness to labor intensively in the cause of security and lasting peace.

Across this nation -- indeed, around the world -- this anniversary of Israel's founding is an occasion for deep admiration and respect. What started as a tiny, struggling country is still tiny -- but has seen six decades of unceasing accomplishment. The desert has bloomed, and Israel has become a nation of world-class enterprises, great universities and medical centers, technological advancement, scholarly brilliance, and cultural beauty. Holocaust survivors and refugees have been welcomed from Europe, the Arab lands, Ethiopia, the former Soviet Union -- and they have found hope and opportunity in the land of Jacob.

In these years, Israel has also given the world many towering examples of strength and statesmanship, among them David Ben Gurion, Abba Eban, Golda Meir, Menachem Begin, Yitzhak Rabin, and a man who defended Israel with every ounce of his strength -- Ariel Sharon. He is in our thoughts this evening. (Applause.)

On this anniversary we think even farther back, to a man of vision and determination named Theodor Herzl. Herzl did not live to see the birth of Israel. Yet he died in the confident belief that good men and women would live on to fulfill his aspiration for the Jewish people, and be inspired by his own words of wisdom: "If you will it, it is no dream."

Herzl, Ben-Gurion, and other early visionaries would marvel at all that Israel has become in these last 60 years. In this modern, vigorous, prospering society they would see much that is new. Yet so much more would still be familiar -- the holy places, the splendor of the land, the reverence of its people and the firmness of character, and, always, the tireless search for peace and the blessings of a normal life.

In tribute to all that's been achieved in these 60 years, one week from today the President of the United States will be in Jerusalem, speaking to the Knesset and proudly joining the celebration. (Applause.) And a celebration is well in order -- because the founding of Israel, the survival of Israel, the success of Israel are among the greatest achievements the world has known. (Applause.) That is what brings us to this auditorium tonight in America's capital city: to mark the anniversary of a state founded within living memory, but with a history reaching back to the prophets, a friend to our own country, a light unto the nations. You've gathered in a spirit of pride and thanksgiving, and rightly so. And I'm tremendously grateful for the honor of joining you this evening.