For Immediate Release
Office of the Press Secretary
May 7, 2008

THE PRESIDENT: I'm pleased to be joined by the Republican House leadership. These are dear friends of mine who are committed to doing what's right for the country.

I just met with the Republican Caucus from the House and I want to share some thoughts with you. First of all, we are committed to a good housing bill that will help folks stay in their house, as opposed to a housing bill that will reward speculators and lenders. There's a House alternative that will do the right thing for the American people when it comes to housing. 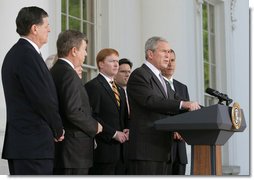 I will veto the bill that's moving through the House today if it makes it to my desk, and I urge members on both sides of the aisle to focus on a good piece of legislation that is being sponsored by Republican members.

Secondly, we talked about gasoline prices. No doubt about it we're deeply concerned about the high price of gasoline, which means that the United States Congress should not pass legislation that makes it harder to increase the supply of crude oil, as well as increase the supply of gasoline. What they should do is allow for the construction of refinery and for environmentally friendly domestic exploration. And if the truth of the matter is Congress were that concerned about the consumers, they ought to make sure that they make the tax relief we passed a permanent part of the tax code.

We talked about the supplemental that's moving. I told the members I support $108 billion supplemental without any strings, and that we're going to work toward that goal.

I talked about the Colombia free trade agreement. The Speaker stopped the bill from moving. All we ask is that it be given an up or down vote. The bill is in our economic interests. If you're worried about the economy, then you got to recognize that opening markets for U.S. goods and services will help strengthen the economy. And if you're worried about the security in our neighborhood, turning our back on a strong ally like President Uribe will be -- is bad national security policy. And the Speaker has got to let this bill come to the floor for an up or down vote.

And finally, we talked about FISA. That's the ability for our intelligence folks and folks on the front line of protecting America to have the tools necessary to stop al Qaeda from attacking us. And the fact that the Democrat leadership refuses to let this vote come to the floor is bad for our national security. This vote will pass -- this bill would pass. It has passed the Senate; will pass the House, thanks to the leadership of the members up here, as well as discerning Democrats. And yet the leadership refuses to let it come up. And the country is at greater risk as a result of not having a modernized FISA bill.

And so thank you all for coming. Proud to work with you and enjoyed visiting today. Thank you.