For Immediate Release
Office of the Press Secretary
May 5, 2008 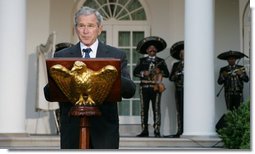 I want to thank the Mariachi Campanas de America from San Antonio, Texas for joining us here today. (Applause.) After dinner we are so fortunate to have Shaila Durcal, who will be singing for us. Hold your applause for Shaila until after she sings -- I will tell you, however, that she has interrupted her honeymoon to come to the Rose Garden tonight, for which we are very grateful.

Cinco de Mayo is a joyous celebration. It commemorates a joyful moment in history of Mexico -- it's when Mexican soldiers defended their independence against what appeared to be an elite and insurmountable army from Europe. Nearly a century and a half later, Cinco de Mayo is celebrated by Americans and Mexicans alike -- after all, it is a symbol of determination against great odds and is a source of inspiration for all who love freedom.

For me, Cinco de Mayo is a chance to say that Mexico and the United States are connected by more than geography. Sure, we share an important border -- but we're also united by values, our love of family and faith and freedom. We share an interest in making sure our people are prosperous and safe.

In America we deeply value the culture and the contribution of Mexican Americans. The United States is a richer place, a more vibrant place because people who have -- claim Mexican heritage now are called United States citizens. And today we honor those Mexican Americans who live in America and we consider ourselves fortunate to have Mexico as a friend and a neighbor.

And so my toast is to Mexico and to the United States and the people therein. Que Dios los bendiga. Feliz Cinco de Mayo. (Applause.)