For Immediate Release
Office of the Press Secretary
May 1, 2008

THE PRESIDENT: In recent weeks, many have expressed concern about the significant increase in global food prices. And I share this concern. In some of the world's poorest nations, rising prices can mean the difference between getting a daily meal and going without food.

To address this problem, two weeks ago my administration announced that about $200 million in emergency food aid would be made available through a program at the Agriculture Department called the Emerson Trust. But that's just the beginning of our efforts. I think more needs to be done, and so today I am calling on Congress to provide an additional $770 million to support food aid and development programs. Together, this amounts to nearly $1 billion in new funds to bolster global food security. And with other food security assistance programs already in place, we're now projecting to spend nearly -- that we will spend nearly $5 billion in 2008 and 2009 to fight global hunger. 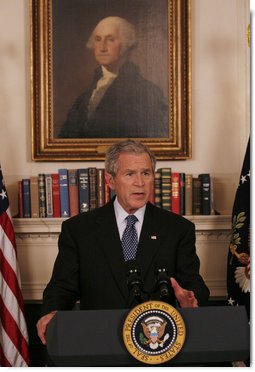 This funding will keep our existing emergency food aid programs robust. We have been the leader for providing food to those who are going without in the past, and we will continue to be the leader around the world. It will also allow us to fund agricultural development programs that help farmers in developing countries increase their productivity. And of course this will help reduce the number of people who need emergency food aid in the first place.

As America increases its food assistance, it's really important that we transform the way that food aid is delivered. In my State of the Union address this year, I called on Congress to support a proposal to purchase up to nearly 25 percent of food assistance directly from farmers in the developing world. And the reason you do that is, in order to break the cycle of famine that we're having to deal with too often in a modern era, it's important to help build up local agriculture. I ask Congress to approve this measure as soon as possible. It's a common sense way to help deal with food emergencies around the world.

Other countries have a role to play as well. America is in the lead, we'll stay in the lead, and we expect others to participate along with us. We're working with our G8 partners and other developed nations to secure commitments from their governments for additional food aid.

We're also working toward the conclusion of a successful Doha agreement that will reduce and eliminates tariffs and other barriers, as well as market-distorting subsidies for agricultural goods. And the reason why getting a Doha Round done is important is it'll end up reducing the cost of food, importing food; it will make it cheaper for consumers all around the world. In other words, we want to change the system to make it easier for people to get less expensive food.

We're also urging countries to remove barriers to advanced crops developed through biotechnology. These crops are safe, they're resistant to drought and disease, and they hold the promise of producing more food for more people.

Here at home, we're working to ensure that our poorest citizens get the food they need. Since 2001, the administration in working with Congress has increased funding for nutrition assistance programs by 76 percent. We've adjusted food stamp benefits annually to cover price increases at the checkout counter. And last month the Agriculture Department made available an additional $150 million to respond to the food needs of those who depend on WIC -- the Special Supplemental Nutrition Program for Women, Infants and Children. With this new funding, we will have increased our support for WIC by 18.6 percent this year.

The American people are generous people and they're compassionate people. We believe in a timeless truth: To whom much is given, much is expected. And so therefore at home we are working to ensure that the neediest among us can cope with the rising food prices. And with the new international funding I'm announcing today, we're sending a clear message to the world: that America will lead the fight against hunger for years to come.

Thank you very much for your interest. God bless.