For Immediate Release
Office of the Press Secretary
April 30, 2008

THE PRESIDENT: Welcome. It's my honor. Thank you for coming. Please be seated. Welcome to the White House. It's an honor to recognize the Super Bowl Champs, the New York Football Giants. (Applause.)

I appreciate you all coming. Mr. Vice President, thank you for joining me up here as we welcome the Giants to the South Lawn. I want to thank John Mara and his mom, Ann, who's joined us; Steve Tisch and his mother, Joan; of course, their head football coach, Tom Coughlin, and his wife, Judy. (Applause.) He got the extension, that's a good thing. (Laughter.) Makes it a little easier to be standing up here. (Laughter.) 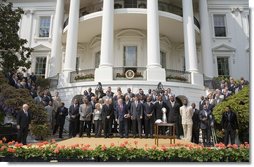 I appreciate all the players who have joined us today, and the coaches and the personnel that make the club function. I thank members of my administration who have joined us. I welcome members of the Congress, Senate, particularly from New Jersey and New York -- (applause) -- state elected officials from New Jersey and New York, it's a good thing to be here.

I welcome those from Walter Reed who have joined us today. (Applause.) And of course, welcome to all the Giants fans. (Applause.) Behave yourself. (Laughter.)

First, it's good to be up here with the Super Bowl MVP, Eli Manning. We have a few things in common. (Applause.) We got some things in common. Eli has a father and a brother in the same business he's in. (Laughter.) Sometimes the press are skeptical. (Laughter.) And he just survived a big wedding. So I asked him coming in, any advice? He said, I wasn't father of the bride. (Laughter.)

New York Giants have one of the great storied histories in pro football. And this club carried on that great tradition. And perhaps -- many would say this is probably the most exciting chapter ever written in the New York Giants' football history. After all, you started off the season and allowed 80 points in the first two games. That would be called a lousy start. (Laughter.) And then you're playing the Redskins -- it's okay, you know. (Laughter.) And the game wasn't going very well, as I recall. And then you rallied, and you won.

A lot of the people that know something about football said that was the turning point. And the winning streak was interesting -- six straight games, as I understand, on two different continents. You also had a great road record. I don't know if the fans understand this, but you piled up more away-game victories than -- in NFL history. (Applause.) And the good news is, your fans still loved you at home. (Laughter.) They really loved you.

You got into the -- you secured a wild card. And it was interesting, in the last game of the season, a lot of folks thought the Coach would just kind of lay down and let New England cruise to a perfect season. (Laughter.) I remember a lot of people speculating about that last game of the season -- and yet you didn't, Coach. Your team didn't win on the scoreboard, but you won the hearts of a lot of Americans for contesting the game. And you also, your team -- (Applause.) 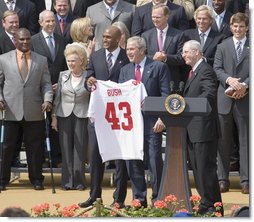 And it clearly gave your team some self-confidence, because you stormed through Tampa Bay and then went into Dallas -- I'm a good sport. (Laughter.) We're going to send Jessica Simpson to the Democrat National Convention. (Laughter.)

THE PRESIDENT: And all of a sudden, a 0-and-2 team was about to square off against the 18-and-0 New England Patriots. Now they've got a lot of experts in our society -- Coach, you might know what I'm talking about -- and in looking back it's hard to find many of the experts who predicted a Giant victory. Most people were calling it a cakewalk; you know, be prepared to turn off your television sets early because this isn't much of a game you're about to watch -- when, in fact, it turned out to be really one of the great, legendary football games in our country's history.

First of all, your defense was awesome, Coach -- (applause) -- and they deserve a lot of credit. And so does your offense. It was the 83-yard comeback drive in the fourth quarter that a lot of folks will remember for a long time coming. Eli Manning started one of the great plays called "The Great Escape" -- it ended on David Tyree's helmet. (Applause and laughter.) So why don't we take you in the White House, you can show me how you did it. (Laughter.) And then Plaxico Burress, of course, caught the winning touchdown with 35 seconds left. (Applause.)

This is a great team that worked together. You won the Vince Lombardi Trophy, and you won the deep gratitude of the 1972 Miami Dolphins. (Laughter.)

First of all, you've won the gratitude of your fans. New York Giants fans love these Giants. (Applause.) And so we congratulate you all, but we're also congratulating your families, your loved ones, those who make the locker room work, the trainers, the people who clean up after you. We want to -- we know you played for some -- ones who lost loved ones, like the Tyrees and the Maras and the Tisches. I know you loved going down the Canyon of Heroes for the first ticker-tape parade since before the attacks of September the 11th, 2001. And I guarantee you there was a lot of New York firefighters and police who were really thrilled to see you. (Applause.) 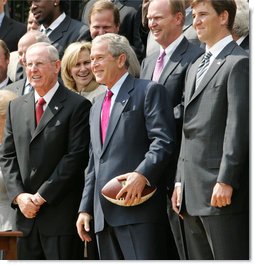 I like the fact that this team, the coaches and players offer free camps for kids. Some of them run life-changing ministries to raise money for children who have cancer. This is a team that supports the Ronald McDonald House and the United Way. It promotes family literacy through Read Across America. It's even helped run a charter school program in inner-city Newark.

I appreciate the fact, Coach, that you and your players support our troops, but more importantly our troops appreciate the fact that you support them. (Applause.) You've come to know the story, like I have, of Lieutenant Colonel Greg Gadson. He lost both of his legs while in Iraq. He first met up with the Giants in September when you invited him to address a pre-meeting that helped inspire the comeback over the Redskins.

Then you saw him in Tampa, when he was trying out his legs that he walked on today to be on the stage with you. He was an honorary captain in Green Bay. He never left the sidelines, despite the 23-below wind chill. In your last team meeting before the Super Bowl, Lieutenant Colonel Greg Gadson urged you to have pride in your team and believe in yourselves, which is exactly what you did.

I'm proud to be on the stage with this man. To me it's a symbol of your respect for our country and your patriotism, that you would let Greg Gadson be a part of this team. He has got the Purple Heart and three Bronze Stars, and now he's got a Super Bowl ring minted for a true giant. (Applause.)

So while you're still on your feet: The Super Bowl New York Giants. (Applause.)

COACH COUGHLIN: Thank you, Mr. President, for those words of inspiration. You did a great job of summarizing our season, and it's a true privilege for all of us to be here. Thank you for inviting the New York Giants to the White House.

We were called -- the New York Giants of 2007 were called "the road warriors." Well, we pale in comparison to the real warriors, the warriors that we visited today at Walter Reed. (Applause.) The thing that impressed all of us so much was their attitude, their positive attitude, the look in their eye, their patriotism, their knowledge of what they were fighting for. And as I always say, we receive great inspiration from our soldiers, and it's an honor to be with them, and it's an honor to have Greg Gadson with us in our drive to the Super Bowl Championship XLII. (Applause.) 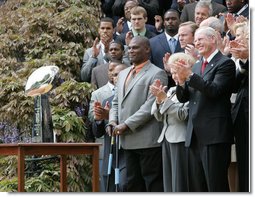 We also would like to present the President with a Super Bowl ball with all the signatures of our championship team. Eli Manning will present this ball. But Mr. President, when you place -- when you place this championship ball in your trophy case, and you pass by the ball, we would ask hopefully that you would reflect on the accomplishments of this great group of young men -- a group of men who believed in themselves, who refused to be beaten, and brought really greater honor and glory to the great game of professional football. Thank you very much. (Applause.)