For Immediate Release
Office of the Press Secretary
April 29, 2008

PRESIDENT BUSH: I have just had a very constructive and important dialogue with the United Nations Envoy to Afghanistan. Mr. Ambassador, thank you so very much for coming to the Oval Office, and thank you so much for serving the cause of peace.

You've been given a very difficult job, which is to help coordinate world -- the world's efforts to help this young democracy succeed, and I want to assure you that the United States government and I personally support you in everything you're going to do. 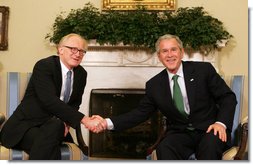 We've supported this -- the creation of this position. We supported your nomination because you're a man of action, a man of determination, and a man willing to sacrifice to help the Karzai government, but more importantly, help the people of Afghanistan realize the blessings of liberty.

And so I appreciate your time. This is our first meeting, and I hope that -- I know it won't be the last. He's given me good advice. He's given me a picture with -- on how the United States government can help him accomplish his missions, and we're more than willing to help.

And so I welcome you to the Oval Office, and thank you for your great service.

AMBASSADOR EIDE: Thank you very much, Mr. President. For me, it's been an honor to be here, and also to feel the support and confidence that you have shown me as I now take on this very difficult assignment. And that support is very important to me. And then -- I have the confidence of the international community, and also the confidence of the Afghan government and the President of Afghanistan, which I feel very strongly of my first few weeks, that's -- those are important tools for me in order to perform my duties effectively.

We also discussed one important event that lies ahead of us, which is the Paris Conference on the 12th of June, and the importance of doing everything we can to mobilize support, mobilize donors, and also see to it that our efforts are as coordinated and as effective as they possibly can.

So thank you very much, Mr. President, for this occasion, and for the support you give me.