For Immediate Release
Office of the Press Secretary
April 28, 2008

PRESIDENT BUSH: It's been my honor to welcome to the Oval Office the President and First Lady of a close friend of the United States. Mr. President, thank you for coming.

We've had a good discussion about a variety of issues. We discussed bilateral relations between Guatemala and the United States, which are very strong. We are friends. We treat each other with respect. Our objective with U.S. foreign policy is to have a neighborhood that is peaceful and prosperous, where social justice is important; want to achieve social justice through good health policy, good education policy, good judicial policy. The United States is pleased to help this government as best as we possibly can help the average citizen get a good education and have good health care. 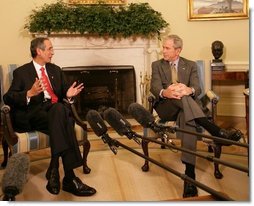 We talked about how CAFTA is working. Exports to the United States have increased; exports from the United States have increased. And that's good. We talked about security and the need for the region -- Mexico, the United States and the countries of Central America -- to fight drug trafficking. I told the President that we are working hard to reduce demand for drugs here in America. And at the same time, we want to work in conjunction with strong leaders to make sure these drug traffickers don't get a stronghold. And that's why it's very important for Congress to fund the Merida project.

We talked about the reforms that the government is instituting inside of Guatemala, including tax reform, and reform to make sure that people who break the law are held to account.

I was particularly pleased to note that the Guatemalan government and its leadership is promoting laws to make sure women are treated well and that violence against women is prosecuted.

And so -- and we're going to talk a little later on about the Millennium Challenge Account. And by the way, we talked about blueberries, and -- so that blueberries are able to come off-season here to the United States, which is a positive development for Guatemalan farmers.

And so we've had a good discussion, and right after this press availability, I'll be taking he and the First Lady to lunch. And I'm looking forward to serving them lunch, and I bet you're looking forward to eating lunch. Thanks for coming.

PRESIDENT COLOM: (As translated.) I want to thank President Bush for his hospitality. We've spent a couple of days working here, and we are very happy to hold this meeting, in which we have discussed strengthening our relationship -- an already a strong relationship, in fact.

We discussed, as the President mentioned, the fight against drug trafficking. We are doing everything necessary to eliminate drug trafficking and drug traffickers from our territory. We discussed the issue of social investment. We have received support from USAID. We, our two countries, have common aims in this regard.

We also discussed the issue of our migrants. We brought up TPS with the President; we will be awaiting a response on that. We described our recent tax reform to the President; that is something we're starting in Guatemala because we need to ensure that we have the public funds to be able to carry out the reforms in the areas of social justice and others that we have discussed.

We want to express our appreciation for the support that we have received from the United States to combat drug trafficking. Recently we received four helicopters; this has been extremely helpful to us. We've also achieved good success on this front with the recent cocaine seizures. In fact, an operation was just carried out last night; a very large one, very successful. And on that, we are working not just with the United States but also with Mexico and the entire neighborhood in Central America, because all of us must be involved, as President Bush said, in order to combat that scourge at all levels.