For Immediate Release
Office of the First Lady
April 24, 2008

MRS. BUSH: Thank you very much. Thank you to all the congressmen -- all the congressmen and women, I should say, who've joined us today who are part of this malaria caucus. Special thanks to Congressman Payne for leading this group, and I appreciate everything you have done for both PEPFAR and for the President's Malaria Initiative.

And thank you, Admiral Ziemer, thank you for that very, very nice introduction. I think actually the work of all the people in this room and so many Americans who work both on the ground in malaria-infected countries, as well as here at home in their own churches or their own congregations, are really the ones who are responsible for the success of PEPFAR and PMI. But I want to thank you especially for all your great work that you've done to leading our nation's efforts to defeat malaria in Africa and around the world.

During my trips to Africa, I have met children whose lives have been saved by anti-malarial drugs, and mothers with new hope because they were given a bed net to protect their children. These successes would have not been possible without Admiral Ziemer's leadership of PMI. So thank you very, very much. Your efforts and those of your whole team are greatly appreciated.

Tomorrow, people across the United States will observe the second annual Malaria Awareness Day. Many of you may not know that the United States also had malaria. In fact, the story is that diplomats who were the ambassadors to the United States and had to live in Washington received hardship pay because of malaria that was here along the Potomac. We eradicated malaria in the 1950s by a very concerted government effort to both use insecticide to decrease mosquito populations, and then to get the word out to people of how they can protect themselves.

Now, we're using these very concerted government efforts with PMI on the ground in the 15 hardest-hit countries that have the most malaria. We're doing this in partnership with each of these African governments, and I think that's why these efforts have been effective, because the strategy is not just ours, it's not just the United States government strategy, but it's working in partnership with each of these governments as they develop their own strategies.

I want to thank everyone here for joining us today in honor of malaria awareness today, and for your support of the Congressional Malaria Caucus.

I want to recognize especially Representative Payne, who's the Chair of the House Committee on Foreign Affairs and the Subcommittee on Africa and Global Health. And Representative John Boozman, thank you very, very much for everything you've done, as well.

All the members here of the Congressional Malaria Caucus, thank you.

And it's great to have Ray Chambers here. Ray is the first U.N. Special Envoy for Malaria, and I think this also shows how the United States government's efforts against malaria have galvanized the U.N. as well to appoint a special envoy. Ray has already helped distribute millions of bed nets through the organization he founded -- Malaria No More. Now, as the Secretary General's Special Envoy for Malaria, he can raise awareness of this disease worldwide. 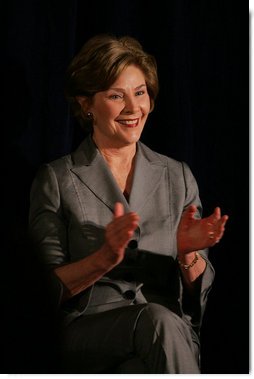 Thanks to Melinda Doolittle, American Idol finalist. Thank you for joining us today. She was with me in Zambia, and thank you for reaching out, and for everything that American Idol has done to make sure Americans have the chance to contribute to our efforts. Melinda and I worked together in Zambia to help distribute insecticide-treated bed nets, paid for in part by viewers of "American Idol Gives Back" -- that special in 2007. And we've just another special now in 2008.

No mother should have to watch her child die from a disease that was caused by a mosquito bite, but that's -- and a disease

that's preventable and treatable. Yet that's exactly what happens every 30 seconds in Africa, where malaria is the leading cause of death for children under the age of five. In some African nations, malaria takes as many lives as HIV/AIDS -- and the vast majority of these fatalities are young children.

In 2005, President Bush took action to respond to this crisis by launching the President's Malaria Initiative. PMI is a five-year, $1.2 billion program that's combating malaria in 15 African focus countries. And this gives me the chance to thank all the members of Congress who also supported PMI for your very good work. Thank you very much. Thank you, Chris.

PMI works to prevent malaria by distributing insecticide-treated bed nets and by the use of spraying insecticides in houses. These are approved insecticides, and this is a very judicious use of these insecticides to spray just on the walls of the houses to kill mosquitos. PMI provides cutting-edge drugs to those who have been diagnosed with the disease. And it offers preventive treatment to pregnant women and unborn children.

Already, PMI has achieved impressive results. More than 6 million long-lasting insecticide-treated mosquito nets have been bought, and around two-thirds of these have already been distributed. Houses have been sprayed in 10 countries -- protecting over 17 million people. Over 12 million treatments of ACTs, the most effective medicine against malaria, have been purchased. And PMI has supported training for about 30,000 health workers. In just its second year of operation, more than 25 million people have benefited from PMI interventions.

Partnerships are at the heart of PMI's strategy. Last year, for example, participants in World Vision's RAPIDS program joined with PMI to deliver nearly half a million bed nets in Zambia. I met a leader of this effort last summer in Lusaka. In 2001, Lister Chingangu co-founded with her husband, "God Our Help Ministries." Today, with support from USAID and World Vision, her organization reaches more than 300 homes to care for patients suffering from AIDS and AIDS-related diseases. By distributing insecticide-treated bed nets to these households, God Our Help has been able to protect vulnerable individuals against malaria. Lister says her program is "serving the Lord" through a "holistic approach" to patient care. Lister is here with us today. Thank you very much, Lister, for your very compassionate work. (Applause.)

Efforts like hers are already showing great progress. There is now evidence in at least four PMI focus countries that a huge impact on malaria transmission is being achieved. By the end of this year, at least 70 percent of families in the first seven PMI focus countries are expected to own one or more insecticide-treated mosquito net. We anticipate more positive results as PMI is implemented in eight new target countries this fiscal year. And we're working toward our goal of reducing malaria deaths by 50 percent in the 15 PMI-targeted countries.

Reaching this objective will require continued support from Congress, also from the international community, from foundations, from businesses, from religious groups, and from private citizens. That's why the formation of the Congressional Malaria Caucus is so significant. This caucus shows the world that American leaders have come together to fight malaria, and that the commitment of the United States to preventing millions of unnecessary deaths caused by this disease is real and long-lasting. Thank you all very much for this good work, and thank you for helping to raise awareness of what Americans can do to improve the lives of families around the world. Thank you all very much. (Applause.)