For Immediate Release
Office of the Press Secretary
April 23, 2008

THE PRESIDENT: Madam Speaker, Mr. Leader, members of Congress, fellow Texans, distinguished guests, Dr. and Mrs. DeBakey: I'm honored to join you on this day of celebration. Throughout our nation's history, the Congressional Gold Medal has been awarded sparingly, in recognition of the tremendous accomplishments that it takes to earn this high honor. The recipients of this medal who have come from the world of science are few, but they are iconic -- they include Thomas Edison, Walter Reed and Jonas Salk. Today we gather to recognize that Michael DeBakey's name belongs among them. 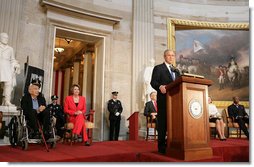 I appreciate the members of the Texas delegation -- Senator Hutchison, Representative Green, and others who sponsored this legislation.

As the chancellor emeritus of the Baylor College of Medicine and the director of the DeBakey Heart Center, Dr. DeBakey has given the citizens of the great state of Texas one more reason to be proud. It's a good thing, too, because we're usually such a quiet bunch -- (laughter) -- unassuming people.

In the year that Michael DeBakey was born, Theodore Roosevelt sat in the White House, Henry Ford produced the first Model T automobile, and the average American's life expectancy was a little more than 51 years. That last point is worth noting, because the number today is nearly 78 years. Our lifetimes have been extended by more than 50 percent within the course of a century, and the man we're honoring today is part of the reason why.

It was Hippocrates, the author of the doctor's sacred oath, who said, "Wherever the art of medicine is loved, there also is love of humanity." Truer words could not be spoken of Michael DeBakey. Growing up in the small town of Lake Charles, Louisiana, he learned the power of compassion at an early age. Every Sunday, as the Speaker noted, Michael's parents and siblings would load the family car with clothes and food for children who lived in an orphanage on the outskirts of town. One weekend, the donations included one of his favorite ball caps. When Michael complained, his mother simply told him, "You have a lot of caps. Those children have none." It was a lesson that he never forgot. And Michael DeBakey has been giving to the world ever since.

The other gift that Dr. DeBakey's parents gave him was a love of learning. In fact, young Michael's mother and father required their children to check a book out of the library every week. One week, Michael returned home frustrated and he told his father that he had found a fascinating book, but that the librarians refused to lend it to him. The book was actually part of a series -- called the Encyclopedia Britannica. (Laughter.) And when his father bought the set for him, Michael read every word of every article in every volume. 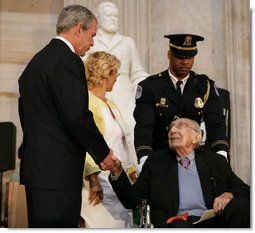 The charitable spirit and disciplined mind that Michael developed in his youth have lasted throughout his life. It was his selflessness that caused him to volunteer for World War II even though he was a successful surgeon and professor. It was his intellect that caused him to help develop the idea of the MASH unit during his service. It was his power of his mind that led him to become one of the pioneers of the heart transplant, bypass surgery, and the artificial heart. And it was his sense of compassion that led him to help create a magnet school in Houston for young people pursuing careers in science.

It's been nearly 40 years since President Lyndon B. Johnson awarded Dr. DeBakey the Presidential Medal of Freedom. At that point, four decades ago, he'd already proven himself to be one of the great scientific minds of his generation. In the years since, that status is being reaffirmed by the many honors he has received, including the National Medal of Science, induction into the Health Care Hall of Fame, a lifetime achievement award from the United Nations, and a "living legend" citation from the Library of Congress.

But that was most interesting in another distinction -- it is this: that Dr. DeBakey was the first foreign physician made an honorary member of the Russian Academy of Sciences. That took quite an act, to get into the Russian Academy of Sciences -- all it took was him saving the life of a president. (Laughter.) In 1996, only five years after the Cold War ended, Dr. DeBakey traveled to Moscow and arranged Boris Yeltsin's quintuple bypass. President Yeltsin spoke for many of Dr. DeBakey's patients when he called him, "a man with a gift of performing miracles."

Dr. DeBakey has an impressive resume, but his truest legacy is not inscribed on a medal or etched into stone. It is written on the human heart. His legacy is the unlost hours with family and friends who are still with us because of his healing touch. His legacy is grandparents who lived to see their grandchildren. His legacy is holding the fragile and sacred gift of human life in his hands -- and returning it unbroken. 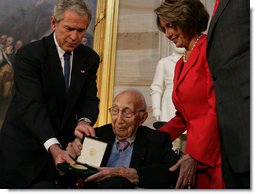 For nearly a hundred years, our country has been blessed with the endless talents and dedication of Dr. Michael DeBakey. And he has dedicated his career to a truly noble ambition -- bettering the life of his fellow man.

Dr. DeBakey, on behalf of all those you've healed and those you've inspired, we thank you. May God bless you.

And now, I ask the Speaker and Senator Reid to join me for the Gold Medal Presentation. (Applause.)

(The Congressional Gold Medal is presented.)