THE PRESIDENT: Thank you. I want to thank the band for giving me a chance to relive my youth. (Laughter.) I've had many a fine day here in New Orleans -- and a pretty good night, too. (Laughter.) And it's great to be back. I want to thank the U.S. Chamber for hosting this reception in honor of the North American Leaders' Summit between Canada, the United States and Mexico. And for all of you here from Canada and Mexico, welcome to New Orleans, one of America's greatest cities. (Applause.) 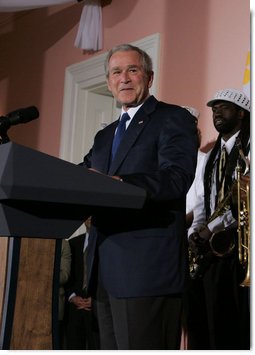 I chose to host this summit in New Orleans for a variety of reasons, one of which is, for centuries this city has been a place where commerce and culture from across the globe have come together -- one of the really great international cities in the United States. And once again, New Orleans now steps on the international scene, where it should be.

I want to thank the Governor of the great state of Louisiana, Bobby Jindal, and the First Lady for being here. (Applause.) My old buddy, the Mayor -- Mayor Nagin is here. Mr. Mayor, it's great to see you. (Applause.) We have spent some quality time together -- (laughter) -- including on the deck of the USS Iwo Jima. Non-alcohol beer for me. (Laughter.)

And so, for all of you who have contributed to New Orleans' resurgence, I want to thank you on behalf of a grateful nation. (Applause.) 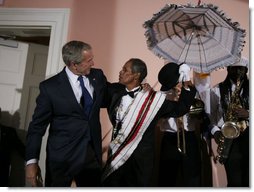 The people of Louisiana understand the benefits of trade firsthand. While many sectors of the economy were hit hard by Katrina, exports were a source of strength. And they continue to be in the years since. I don't know if a lot of people know this, but exports from Louisiana surpassed $30 billion in the year 2007 -- that would be $30 billion for the first time ever. (Applause.) All these exports come through New Orleans, which is a source for jobs and hope.

And the fundamental question is, will we continue to be a nation that believes in free and fair trade? Canada and Mexico are our two most important trading partners. Since the North American Free Trade Agreement took effect, an agreement I strongly support, trade between the United States, Mexico and Canada has more than tripled, and our economies have grown by more than 50 percent. (Applause.)

The United States has an opportunity to continue a trading agenda. As a matter of fact, we have an opportunity with three important countries -- Colombia, South Korea and Panama. Interestingly enough, all three of these countries are among Louisiana's top 10 foreign markets for exports. These agreements will be good for New Orleans' workers and business. And the Mayor recognized that. He wrote a leader to our Speaker -- wrote a letter to our Speaker, who is the leader in the Congress -- and here's what he said: "Each of the future free trade agreements would provide unique opportunities for the city of New Orleans to increase international economic development." 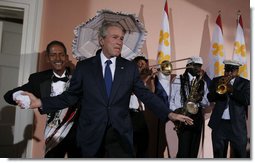 The economic argument for free trade with Colombia is very clear. Almost all Colombian products now enter America duty-free, yet many of our products -- (feed drop) -- tariffs in Colombia. Now, think about that. All I suggest is that we level the playing field; that we be treated just like we treat others. -- (feed drop) -- products into Colombia face a tax, a tariff, which makes them more expensive. It makes it harder for our small businesses and farmers to be able to sell into Colombia. Yet their products come here virtually duty-free. And so, by approving this deal, it will level the playing field, but more importantly, it will help our entrepreneurs and help our workers.

There's another cost because of congressional inaction, and that is, Colombia is one of our strongest allies in our neighborhood, and it's important to support our friends. And it's important to send a clear message that we stand for rule of law and democracy, which is precisely what President Uribe believes in. He's fighting these -- (feed drop) -- strengthen the rule of law. He's protecting his labor leaders. He is a strong, solid leader.

Yet if we turn down this deal or if this deal does not go forward, it would send a variety of messages: One, America can't be counted on to stand next to its friends. Two, it will embolden the voices of false populism in our neighborhood. And three, it will make it harder for President Uribe to do what is necessary to make sure Colombia is a safe place for people to live. And I fully understand that this is a tough political vote for some, but it's about time America sets aside petty politics and focuses on doing what's right for the United States of America. (Applause.)

So thanks for letting me come by, and thanks for hosting this very important meeting. I am confident the Prime Minister of Canada and the President of Mexico will really enjoy their stays in New Orleans. They will find what I have found -- that it's a city not only of good food, good cheer, but it's a city of really fine people. God bless.