For Immediate Release
Office of the First Lady
April 21, 2008

MRS. BUSH: Thank you. LizBeth just said she was very nervous, but we couldn't tell. You did a really great job. Thank you very much. 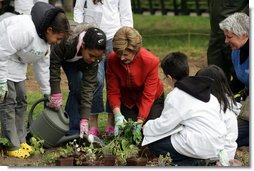 And especially with the members of the Boys Club of New York and the Lower East Side Girls Club. Thank you all for joining us today. (Applause.) I got to plant a few native plants with the members of these two, the Girls Club and the Boys Club. They've done garden design. They've studied what they wanted to plant, the specific plants they wanted to put in. They've learned about native plants. They've learned about invasive non-native plants. And I'm very proud to have this chance to be with them.

Thank you, Vin Cipolla, the President of the National Park Foundation. Thank you for what you do. (Applause.) I also want to introduce Regan Gammon, who is the Citizen Chair of the National Park Foundation. She's with us here. And of course recognize Warrie Price again, and Maria Burks, the National Park Service Commissioner for the National Parks of New York Harbor and the Superintendent of the Manhattan Sites. (Applause.) Thank you very much for everything you do. And I do hope that all the boys and girls here get an idea in your mind about a job that you might grow up to want to have, and that is working in our national parks, from our historical sites, like the White House - I actually live in a national park - to our most magnificent natural sites like the Grand Canyon or Yosemite or Acadia National Park or all our beautiful natural national parks.

And then a special thanks to Lynda Johnson Robb. Thank you so much, Lynda, for joining us today. (Applause.) I wish your mother could be here. She would love every minute of this. She would love seeing these boys and girls as they plant native plants here right in New York City. It would be so great to have her with us today.

The Lady Bird Johnson Wildflower Center is a key partner with First Bloom. First Bloom is a new program that combines both our national parks and the Lady Bird Johnson Wildflower Center. And the whole goal of it is to make sure young people learn about our fabulous natural treasures that we've all inherited as Americans, and especially about our native plants and wildlife.

I want to recognize Susan Reiff, who is the Executive Director of the Lady Bird Johnson Wildflower Center. Susan, thank you very much for joining us today. (Applause.) 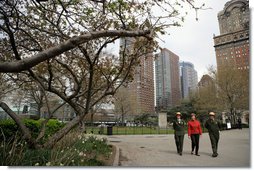 When people think of New York City, national parks probably are not the first thing that comes to mind. But in fact there are 10 national parks in New York City and northern New Jersey. And we're standing right in front of one of them right now. Castle Clinton, that's behind me right here, is one of our national monuments. Castle Clinton was constructed to defend New York Harbor in the war of 1812. Since then it's served as a theater, as an immigration depot, and even as an aquarium. And this landmark was spared from being torn down in 1946. Instead, Castle Clinton became a national monument and a great example of how our national park system protects our history and our heritage.

This National Park Week we're celebrating what kids are doing to help preserve our natural and historic treasures. We're also highlighting programs like First Bloom, which are bringing kids into our national parks, and bringing our national parks' ethic of conservation right into the communities of all of our children. By teaching kids how to protect native plants, First Bloom is giving our young people a head start toward a lifetime of environmental stewardship.

First Bloom was announced last October, and already it's sprung to life in five pilot cities. At the White House last week, First Bloom hosted an activity to help kids plant the seeds of native Washington flowers that would be planted in compostable cups, just like they did, and then planted at the new World War II Memorial and the FDR Memorial on the National Mall.

Several days ago I was with students in Dallas who were introduced to First Bloom. They did "shake a shrub." They shook shrubs to see what would fall out. And you know what falls out? I'm sure these kids do. Seeds fall out, bugs fall out - all of those sort of things fall out of a shrub. Those plants that those kids in Dallas were planting will go to their nearest national park, which was Lynda's home, the LBJ Ranch National Park.

Today's event is very special because this is the first First Bloom event in New York City. All these boys and girls have spent a lot of time preparing for today. They've searched the Battery for native plants. They've identified invasive species. They've done art projects and garden designs. They've planted the native seeds in biodegradable cups. And some of these kids have even seen Zelda. Do you all know who Zelda is? Zelda is the wild turkey that lives here in New York City, and some people can see it right around here in the Battery.

Today your study and hard work is taking root. The gardens you've designed are being stocked with beautiful plants that are native to Manhattan, like Bluebells, Blue-eyed Grass, Blue Wood Aster. Apparently some of you share my favorite color: blue. You've chosen these plants carefully to make sure there will always be something colorful blooming here in Battery Park, no matter what the season.

And, of course, we're not the only ones who are going to get to enjoy this beautiful display. Your gardens will be seen by thousands of Americans who come to visit the Battery and this national monument. What a great way to celebrate National Park Week.

Thank you for inviting me to participate today. Special thanks to First Bloom and the Battery Conservancy, and to all of the young people here - the Boys and Girls Clubs who have planted these native plants. (Applause.)

President Franklin Roosevelt once said, "There's nothing so American as our national parks." So through First Bloom and the work of the National Park Foundation, we can make sure that all young Americans learn to know and love our national parks. Thank you all very, very much, and thank you especially to the young people here. (Applause.)

God bless you all, and God bless America. (Applause.)