For Immediate Release
Office of the Press Secretary
April 21, 2008

PRESIDENT BUSH: Mr. Prime Minister, thank you, sir, for your personal friendship, thank you for your leadership. I don't know if the people of Canada understand the leadership role you took in Romania, but it was strong and effective. And I want to congratulate you in front of your media about the job you did. Not only did you represent your country well, you represented universal values. You spoke clearly about them, and so I thank you for that. 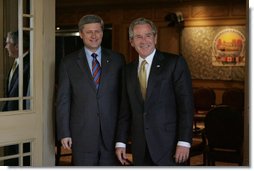 We had a good visit. I'm always interested in making sure that, if there's any bilateral tensions or bilateral issues, that I know of them, so that we can work collaboratively to deal with them. And in the past, one such issue was whether or not our people could travel back and forth between our respective countries in a way that didn't inconvenience them, or the borders were -- being able to flow smoothly so it didn't inconvenience trade. And I think we've worked through those issues.

I can remember the last time we visited, there was great concern about whether or not the Western Hemisphere Travel Initiative would be counterproductive to our friendship and relationship. I thank your government, thank your ministers and the people in your staff for working hard to find a way that meets our laws and didn't inconvenience the people of Canada or the United States. So I'm pleased with that progress.

We also talked about the importance of trade between Canada and the United States, and Canada and Mexico, and the United States and Mexico. And I assured the Prime Minister that I'm a strong advocate for free trade. I believe it's in our nations' interests that we continue to have a free trade agenda. All of us want to make sure we're treated fairly, and we can do that. And this summit comes at an opportune time to reaffirm the benefits of the trading arrangements between our three nations.

Canada and the United States have got a very unique and important relationship, and I really appreciate the chance to spend time with you and visit about these -- about the issues of concern.

Finally, the Prime Minister is very articulate on the subject of climate change, and I assured him that my speech in the Rose Garden was a sincere speech, a speech that laid out a strategy that I think will be effective. And I look forward to continuing to work with you on that issue.

But, thanks, good to see you.

PRIME MINISTER HARPER: It's nice to see you again. Thank you for the warm welcome and hospitality. (Speaks in French.)

I'll just say once again, delighted to be here in New Orleans, originally a Francophone city; in fact, founded by New France -- my dad's favorite American city, I was telling him. We discussed a lot of things to do with the border, to do with environment, energy, trade and commercial relations. And as you've mentioned, we've made some considerable progress on some of these things. 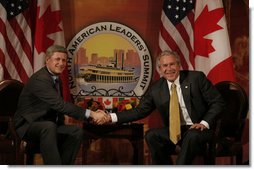 That said, what I appreciate most, what I've appreciated in our relationship over the past couple years has been the fact that whether we agree or disagree, we're always able to talk very frankly, very up-front. The President has never promised me anything he couldn't deliver, and that's always appreciative -- appreciated.

We have some important joint work going on, not just in this continent but around the world, including in Afghanistan. I appreciate your words about Bucharest, and I can tell you our armed forces look very much forward to working in partnership with your people in Kandahar.

So I'm sure we'll have a great summit. And see you again at the G8, I'm sure -- we've got a few more of these to go through before it's over. (Laughter.)