THE VICE PRESIDENT: Your Holiness, President and Senator Clinton, Your Eminences Cardinal Bertoni and Cardinal Egan, Your Excellency Bishop DiMarzio, clergy and religious, distinguished guests, and ladies and gentlemen, good evening. It's a privilege to join all of you as our esteemed visitor, the Holy Father, concludes his visit to the United States. It has been a memorable week, and Pope Benedict XVI has stepped into the history of our country in a very special way. 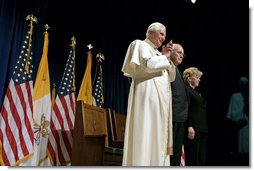 Some 60 million Americans belong to his fold, and all of America respects this messenger of peace and justice and freedom. (Applause.) From the nation's capital to this great city of New York, our citizens have received the Pope with reverence and with affection, with songs of joy and with prayers of thanksgiving.

Your Holiness, on your first apostolic visit to the United States, you've encountered a nation facing many challenges, but with more blessings than any of us could number. (Applause.) You have met a people of resonating faith who affirm that our nation was founded under God, who seek His purposes and bow to His will. (Applause.) You have seen a country where the torch of freedom, equality and tolerance will always be held high; a country where you, a herald of the Gospel of Jesus Christ and the leader of the Roman Catholic Church, will always be welcome. (Applause.)

To our diverse country, you have brought a universal message of hope and salvation. You have spoken to Americans with eloquence and feeling, and for so many, these have been days of reflection and personal renewal. Whether in your presence or listening across great distances, millions have found in your words hope against despair, certainty amid confusion, and strength for journeys of their own.

Your Holiness, here in New York you have addressed the representatives of many nations, and celebrated the Eucharist before many thousands. And you have moved us, in particular, by your visit to Ground Zero. (Applause.) There, you prayed for eternal light and peace upon the innocent victims of September 11th, 2001, and you asked that the rest of us may live so that all who died on that morning may not have been lost in vain. That is our daily meditation as well, and it remains our daily prayer.

Your Holiness, nearly 57 years have passed since the day of your ordination as a priest in June 1951. You might have found it hard to imagine then that you would stand before all humanity as a teacher, a statesman, and the shepherd of more than a billion souls. That is what God has called you to do. (Applause.)

In these 57 years, your wisdom and your pastoral gifts have been extraordinary blessings to our world. In these six days, you've shared those blessings very directly for the people of the United States. Your presence has honored our country. Although you must leave us now, your words and the memory of this week will stay with us. For that, we are truly and humbly grateful. (Applause.) 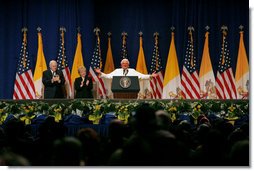 And so with the greatest warmth and respect, we thank you, we bid you a safe return to Rome, and until we meet again we ask Your Holiness to remember in your prayers the United States of America. (Applause.) 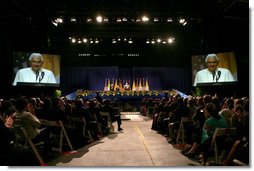 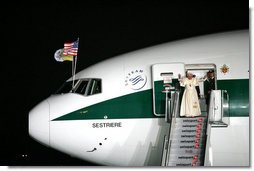