For Immediate Release
Office of the Press Secretary
April 18, 2008

THE PRESIDENT: Thank you all, please be seated. Welcome.

A few weeks ago my dear friend, Alphonso Jackson, informed me of his decision to step down as the Secretary of Housing and Urban Development. Secretary Jackson is one of the longest serving members of my administration. I know him well, he's a decent man, a dedicated man and he's a compassionate man. He's worked tirelessly at HUD to help America's homeowners. He has transformed a lot of lives, and America is a better place because of your service. I wish you and Marcia all the very best as you head back to Texas -- I'll be right behind you. (Laughter.) 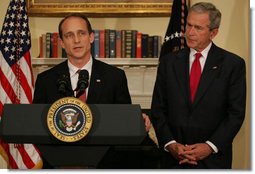 The Department requires strong leadership at a time when our housing market is experiencing a period of challenge and uncertainty. In seeking to fill this important Cabinet post I looked for a leader with an impressive background in finance; someone who understands the important role the housing market plays in the broader economy. I sought a reformer who would act aggressively to help Americans obtain affordable mortgages, and I sought a -- and be able to keep their homes. I sought a consensus-builder who's earned the respect of Republicans and Democrats, who can get things done.

I found these qualities and much more in Steve Preston. Steve is a strong executive with a quarter century of management experience. He's had senior leadership roles at two multi-billion dollar corporations and in the financial services industry. He understands the free enterprise system from every angle.

As the head of the Small Business Administration, Steve has advanced a reform agenda that made the agency more accountable, more effective and more responsive. Under his leadership, America's entrepreneurs have received improved access to federal assistance, as well as educational resources. Under his leadership, the SBA has increased its focus on supporting business development in areas with high unemployment and poverty rates. And under his leadership, agency efficiency has improved, and America's small business community has found a trusted friend and partner.

During his tenure at SBA, Steve has managed loan guarantee programs that are similar in structure to those run by the Federal Housing Administration, and he's made these programs run very effectively. When Steve took the reins at the SBA, he streamlined the agency's efforts to disburse loans to small businesses and homeowners devastated by Hurricane Katrina. He matched every loan applicant with a case manager to provide the compassion and expertise that applicants needed to navigate the loan process.

Within months of Steve's reforms, the backlog of loans fell 80 percent, and response times improved by 90 percent. Today more than $6 billion in SBA loans are helping more than 160,000 Gulf Coast families rebuild their homes, their businesses and their lives. Steve Preston is an experienced manager who knows what to do. He knows how to tackle a problem, devise a solution and get results. That's exactly the kind of leadership I was looking for. And that's why I'm going to send his name up to the United States Senate to be the Department's Secretary.

He will play a central role in helping address our nation's housing challenges. He'll work with members of Congress to advance responsible legislation that will help millions of American homeowners. He will be entrusted with one of the most rewarding jobs in the federal government: helping our fellow Americans have a place to call a home.

These are important responsibilities, and I'm confident I picked the right person for the job. He's a hardworking, dedicated professional. In fact, he was confirmed to his current post by the United States Senate without a single vote in opposition. Let's hope the streak continues. (Laughter.)

I want to thank Deputy Secretary Roy Bernardi. I appreciate very much your willingness to step forward to serve the country, as well as to serve as Acting Secretary of HUD. And I thank you for keeping that position until Steve is confirmed.

I also want to thank Steve's family -- Molly, as well as Anna, Madeleine, Gibson, Eleanor and Steve, Jr. Thank you all for coming to the White House to witness this very important moment.

I ask the Senate to quickly consider Steve Preston and to ratify him on a timely basis. Congratulations.

MR. PRESTON: Thank you very much. (Applause.) Thank you, Mr. President. I'm obviously very honored by the confidence you've placed in me, and if confirmed will be very proud to serve as the 14th Secretary for Housing and Urban Development. I'd also like to thank my wife, Molly, and my great five children who are here to share with moment. So -- and all the support they give me.

You know, when I joined your administration almost two years ago, it was because I believed so strongly in the vision of helping people reach their dreams of owning a business, owning a retirement portfolio and, of course, owning a home. As I've heard you say, Mr. President, if you own something, you've got a vital stake in the future of the country. The more ownership there is in America, the more vitality there is in America, and the more people have a vital stake in the future of our country.

As we help people pursue the American Dream, we need to have a market to operate fairly and effectively for all Americans. And our solutions must restore confidence in our markets, while not erecting barriers to future entrepreneurs, investors and home buyers.

In addition to the reforms we made at the SBA -- and I appreciate your mentioning them -- I'm especially proud of the work we are doing in inner-city communities to help small business owners bring lasting change to places in our country that need it the most -- by bringing jobs, by bringing economic opportunity, and by bringing investment. So I certainly hope to bring that spirit to the Department of Housing and Urban Development, to help restore stability and confidence in the housing market, and to promote sustainable job ownership, free from discrimination in our country.

So thank you once again, Mr. President, so much, for your confidence. And I look forward to serving with you. (Applause.)