For Immediate Release
Office of the Press Secretary
April 14, 2008 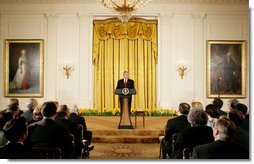 With a single sentence, Thomas Jefferson changed the history of the world. After countless centuries when the powerful and the privileged governed as they pleased, Jefferson proclaimed as a self-evident truth that liberty was a right given to all people by an Almighty.

Here in America, that truth was not fully realized in Jefferson's own lifetime. As he observed the condition of slaves in America, Jefferson said, "I tremble for my country when I reflect that God is just" and "that his justice cannot sleep forever." Less than 40 years after his death, justice was awakened in America and a new era of freedom dawned.

Today, on the banks of the Tidal Basin, a statue of Thomas Jefferson stands in a rotunda that is a memorial to both the man and the ideas that built this nation. There, on any day of the week, you will find men and women of all creeds, colors, races and religions. You will find scholars, schoolchildren and visitors from every part of our country. And you will find each of them looking upward in quiet reflection on the liturgy of freedom -- the words of Thomas Jefferson inscribed on the memorial's walls.

The power of Jefferson's words do not stop at water's edge. They beckon the friends of liberty on even the most distant shores. They're a source of inspiration for people in young democracies like Afghanistan and Lebanon and Iraq. And they are a source of hope for people in nations like Belarus and Burma, Cuba, Venezuela, Iran, Syria, North Korea and Zimbabwe, where the struggle for freedom continues.

Thomas Jefferson left us on July 4, 1826 -- fifty years to the day after our Declaration of Independence was adopted. In one of the great harmonies of history, his friend and rival John Adams died on the very same day. Adams' last words were, "Thomas Jefferson survives." And he still does today. And he will live on forever, because the desire to live in freedom is the eternal hope of mankind. 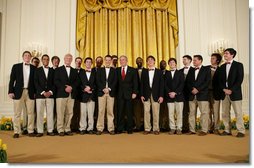 And now it's my pleasure to welcome Wilfred McClay to the stage. (Applause.)

MRS. BUSH: Thank you very much, Mr. McClay and Mr. Wilson. Thank you so -- for your reflections on Thomas Jefferson's life and his contributions to our nation, and thanks to each of you for joining us today so we can learn more about the legacy of one of America's most influential founding fathers.

Thomas Jefferson believed that education is the cornerstone of a free society, so it's therefore little surprise that he viewed the founding of the University of Virginia as one of his top achievements, as we know from both of your talks. He called the building of this school the last service he could render his country, saying, "Could I see it open? I would not ask an hour more of life."

But in fact Thomas Jefferson lived a little over a year after the University of Virginia opened its doors. During this time he was involved in the University activities, and he invited students, including a young Edgar Allan Poe, to dine with him each Sunday at nearby Monticello.

Today, Jefferson still shapes the lives of the students at the school he founded. The architecture of his academical village encourages free study in a collaborative environment, and UVA's philosophy of student self-governance epitomizes our third President's democratic ideals.

The 18 men I now introduce are heirs to this tradition. The Virginia Gentlemen are UVA's oldest a cappella vocal ensemble. They perform for distinguished audiences across the country and around the world. Tonight is their first performance at the White House, and we're happy to have them.

Here to perform a few musical selections, including the University of Virginia's school song, please welcome the Virginia Gentlemen. (Applause.)