For Immediate Release
Office of the Press Secretary
April 14, 2008

THE PRESIDENT: Welcome to the Rose Garden. Of course, this is an old habit for a lot of the players standing behind me. After all, this is the fifth year in a row that the mighty Navy football team won the Commander-in-Chief's Trophy. And we're here to congratulate them on that amazing achievement. As a matter of fact, coming to the Rose Garden is as familiar a place as Bancroft Hall. (Laughter.) 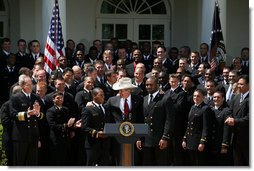 We welcome you here and we congratulate you. Coach, thanks for coming. Proud you're here. This team has had an historic season. For the third year in a row, had the most rushing yards in the nation, as well as the nation's highest graduation rate. (Applause.) You went to your fifth straight bowl game, and of course you accomplished your most important goal: You beat Army. (Applause.)

This team set a school record by scoring 511 points. And with your sixth straight win over Army, you established the longest winning streak against Army in history. You beat Notre Dame for the first time since 1963. (Applause.) I'm probably not going to spend much time talking to the Pope about it. (Laughter.)

You had an interesting game in the great state of Texas against North Texas, when you won 74 to 62 -- 136 combined points were the most scored in a regulation game in the history of NCAA's top division. You earned an invitation to play in the Poinsettia Bowl -- forget the score. (Laughter.) But you made an exciting finish. In other words, you brought great credit to a fabulous place of higher institute -- of learning. And I want to thank your head coach and welcome him. He's been a big part of the success over the past six years, and no doubt in my mind -- more importantly no doubt in the superintendent's mind -- that he's going to be a fabulous head coach for years to come. Congratulations. (Applause.)

I've been reading about some of the standout performers on the team, starting with slot back Reggie Campbell, team captain. On offense, he holds -- he owns eight school records. He was the MVP of the Army-Navy game. Linebacker Irv Spencer, team captain on defense. He led the team with 95 tackles. Adam Ballard -- Texan. (Laughter.) Lewisville, Texas. He came back from a broken leg in 2006 to score Navy's first touchdown of the season; he's a bruiser. Cornerback Ketric Buffin, Rowlett, Texas. You think I only talk about Texas, don't you? (Laughter.) Had an interception in each of the first four games. He's the first player in school history to accomplish that feat. Zerbin Singleton. Now there's an inspirational story for all. He faced great challenges growing up, he overcame injuries from a car accident to make it to the Naval Academy, and during the season he received the Disney Wide World of Sports Spirit Award as college football's most inspirational figure. He's the brigade commander of all 4,200 midshipmen at the Naval Academy. He'll soon begin flight training as a Marine aviator. 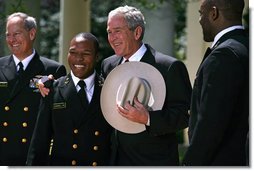 Proud to welcome all the individual stars here. But no question this team played well because you played as a unit. I want to thank every football player for agreeing to put on the uniform of the finest military ever. You signed up after 9/11. You knew the stakes involved in the war against extremists and radicals. You knew that your country depended on you. And you didn't hesitate to wear the uniform.

I welcome you as stars on the football field, and I welcome you as soon-to-be sailors and Marines who have a major responsibility to protect the United States from harm and spread the great blessings of liberty so we can have peace.