For Immediate Release
Office of the Press Secretary
April 9, 2008

PRESIDENT BUSH: I'm so honored to welcome the Senior Minister from our very close ally, Singapore, back to the Oval Office. Gosh, I think we must have met -- seems like a half a dozen, at least, times since I've been the President.

PRESIDENT BUSH: And every time I meet with you I come away with a better understanding of a lot of issues, particularly in your part of your world. I thank you very much for briefing me and sharing your wisdom. 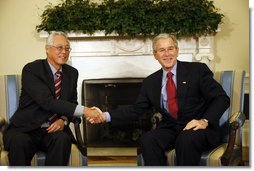 We spent a lot of time talking about the neighborhood. But before I get to a couple of countries in the neighborhood, I do want to say, one, how much I appreciate your firm stance against extremists and radicals who use the tactics of murder and intimidation to advance their ideologies. Singapore is a very strong ally in the war against the extremists.

And I also am so pleased that the trade agreement that we negotiated during our respective times was kicked in. I'm a believer in free and fair trade, as are you, sir, and our FTA with Singapore was a very positive accomplishment for our two countries.

We did spend time talking about the countries in the neighborhood. We spent time on Burma and the need for the military regime there to understand that they shouldn't fear the voices of people. And yet they do. I'm disappointed with the progress made to date there, and would urge the military leadership there to open up and respond to the will of the people.

And the other issue is China and its relations with Tibet. We both agree that it would stand the Chinese government in good stead if they would begin a dialogue with the representatives of the Dalai Lama. They'll find -- if they ever were to reach out to the Dalai Lama, they'd find him to be a really fine man, a peaceful man, a man who is anti-violence, a man who is not for independence but for the cultural identity of the Tibetans being maintained.

And so I want to thank you, sir. You got good knowledge and you've had a lot of experience, and you're kind to share it with me.

SENIOR MINISTER GOH: Well, thank you very much, President, for welcoming me back to Oval Office. It's a joy coming back here and to see you. I was very interested in developments in the Middle East, and the President briefed me on developments in Iraq, on concerns which he has over Iran, which is still a very big problem not just for the U.S. but for the region and for the world.

Then the President was interested in developments in Asia, so I was able to add some value to his knowledge -- (laughter) -- on Southeast Asia and on Asia.

On Tibet, I agree with the President that the way forward will be for the Chinese leaders to talk to some representatives of the Dalai Lama. Better still if they can, to talk directly to the Dalai Lama. I think that's the only way for them to contain this problem.

On Myanmar, I told the President that while the army is the problem, the army has to be part of the solution. Without the army playing a part in solving problems in Myanmar, there will be no solution. So these are the issues which we discussed.

And, of course, I emphasized the importance of keeping the world -- having this free trade regime. The Doha Round should be encouraged to move forward; it's moving too slowly, but it should move forward.