For Immediate Release
Office of the Press Secretary
April 8, 2008

THE PRESIDENT: Good afternoon, and welcome.

The Medal of Honor is America's highest decoration for military valor. Over the years, many who have received the medal have given their lives in the action that earned it. The name of Petty Officer Michael Anthony Monsoor will now be among them.

In September 2006, Michael laid down his life for his brothers in arms. Today, we remember the life of this faithful Navy SEAL. And on behalf of a grateful nation, we will present Michael Monsoor's family with the Medal of Honor that he earned. 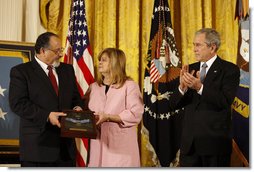 Previous Medal of Honor recipients, thank you for joining us.

I appreciate Chaplain Burt; Navy SEALS -- the finest warriors on the face of the Earth; the Monsoor family, and everybody else.

The Medal of Honor is awarded for an act of such courage that no one could rightly be expected to undertake it. Yet those who knew Michael Monsoor were not surprised when he did. This son of Orange County, California, grew up in a family where helping others was a way of life. Mike's father was a Marine; his mother a social worker. Together, they raised their four children to understand the meaning of service and sacrifice.

From a very early age, Mike showed the strength of his own convictions. Apparently going to kindergarten wasn't one of them. Mike had no complaints after the first week of school -- until someone broke the news to him that he had to go back the next week. (Laughter.) Many mornings, Mike refused to put on the nice clothes for school. Instead, he insisted on wearing mismatched outfits. Mike's mother soon discovered there was no stopping the determined young boy from mixing plaids and stripes. And years later, there would be no stopping an even more determined young man from donning a uniform of Navy Blue.

In some ways, Mike was an unlikely candidate for the Navy. He suffered from terrible asthma as a child. On some nights, his coughing fits would land him in the hospital. But Mike would not lie low for long. He strengthened his lungs by racing his siblings in the swimming pool. He worked to wean himself off his inhaler. He built himself into a superb athlete -- excelling from sports like football to snowboarding. 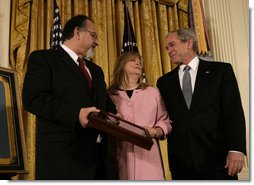 After enlisting in the Navy, he began preparing for the ultimate test of physical endurance: SEAL training. Less than a third of those who begin this training become SEALs. But Mike would not be denied a spot. In September 2004, he earned the right to wear the Navy SEAL trident.

The newly minted frogman became a beloved member of the SEAL team community. His teammates liked to laugh about the way his shiny Corvette would leave everybody in the dust. But deep down, they always knew Mike would never leave anybody behind when it counted. He earned their confidence with his attention to detail and quiet work ethic. One of Mike's officers remembers an instructor once asking after an intense training session, "What's the deal with the Monsoor guy? He just says, 'Roger that,' to everything."

When Mike deployed with his team to Ramadi in the spring of 2006, he brought that attitude with him. Because he served as both a heavy machine gunner and a communications operator, he often had a double load of equipment -- sometimes more than a hundred pounds worth. But under the glare of the hot desert sun, he never lost his cool.

At the time, Ramadi was in the clutches of al Qaeda terrorists and insurgents. Together, the SEALs and the Army 1st Battalion of the 506 Infantry Regiment took the offense against the enemy. The SEALs carried out a broad range of special operations -- including providing sniper cover in tough urban conditions, and conducting raids against terrorists and insurgents. Overall, Mike's platoon came under enemy attack during 75 percent of their missions. And in most of these engagements, Mike was out front defending his brothers.

In May 2006, Mike and another SEAL ran into the line of fire to save a wounded teammate. With bullets flying all around them, Mike returned fire with one hand while helping pull the injured man to safety with the other. In a dream about the incident months later, the wounded SEAL envisioned Mike coming to the rescue with wings on his shoulders.

On Saint Michael's Day -- September 29, 2006 -- Michael Monsoor would make the ultimate sacrifice. Mike and two teammates had taken position on the outcropping of a rooftop when an insurgent grenade bounced off Mike's chest and landed on the roof. Mike had a clear chance to escape, but he realized that the other two SEALs did not. In that terrible moment, he had two options -- to save himself, or to save his friends. For Mike, this was no choice at all. He threw himself onto the grenade, and absorbed the blast with his body. One of the survivors puts it this way: "Mikey looked death in the face that day and said, 'You cannot take my brothers. I will go in their stead.'"

Perhaps the greatest tribute to Mike's life is the way different service members all across the world responded to his death. Army soldiers in Ramadi hosted a memorial service for the valiant man who had fought beside them. Iraqi Army scouts -- whom Mike helped train -- lowered their flag, and sent it to his parents. Nearly every SEAL on the West Coast turned out for Mike's funeral in California. As the SEALs filed past the casket, they removed their golden tridents from their uniforms, pressed them onto the walls of the coffin. The procession went on nearly half an hour. And when it was all over, the simple wooden coffin had become a gold-plated memorial to a hero who will never be forgotten.

Come on up. And now George and Sally Monsoor will be here -- a Military Aide will read the citation.

The citation is read:

The President of the United States, in the name of the Congress, takes pride in presenting the Medal of Honor, posthumously, to Master At Arms Second Class, Sea, Air and Land, Michael A. Monsoor, United States Navy. For conspicuous gallantry and intrepidity at the risk of his life above and beyond the call of duty while serving as Automatic Weapons Gunner for Naval Special Warfare Task Group Arabian Peninsula, in support of Operation IRAQI FREEDOM on 29 September 2006.

As a member of a combined SEAL and Iraqi Army sniper overwatch element, tasked with providing early warning and stand-off protection from a rooftop in an insurgent-held sector of Ar Ramadi, Iraq, Petty Officer Monsoor distinguished himself by his exceptional bravery in the face of grave danger. In the early morning, insurgents prepared to execute a coordinated attack by reconnoitering the area around the element's position. Element snipers thwarted the enemy's initial attempt by eliminating two insurgents. The enemy continued to assault the element, engaging them with a rocket-propelled grenade and small arms fire. As enemy activity increased, Petty Officer Monsoor took position with his machine gun between two teammates on an outcropping of the roof. While the SEALs vigilantly watched for enemy activity, an insurgent threw a hand grenade from an unseen location, which bounced off Petty Officer Monsoor's chest and landed in front of him. Although only he could have escaped the blast, Petty Officer Monsoor chose instead to protect his teammates. Instantly and without regard for his own safety, he threw himself onto the grenade to absorb the force of the explosion with his body, saving the lives of his two teammates. By his undaunted courage, fighting spirit, and unwavering devotion to duty in the face of certain death, Petty Officer Monsoor gallantly gave his life for his country, thereby reflecting great credit upon himself and upholding the highest traditions of the United States Naval Service.

(The Medal of Honor is presented.) (Applause.)