For Immediate Release
Office of the First Lady
April 7, 2008

Mrs. Bush's Remarks at a Performance of "One Destiny"
East Room

MRS. BUSH: Hello, everybody. Have a seat. Good to see you all. Welcome to the White House. I want to give a special welcome to Mrs. Salma Kikwete, the First Lady of Tanzania. (Applause.) President Bush and I visited Tanzania when we went to Africa in February. And so I want you all, when you go back to your schools, look at your maps and find out where Tanzania is. It's on the far east coast of Africa, on the Indian Ocean. It's the state that has Mount Kilimanjaro, that had -- the country that has Mount Kilimanjaro, that has a lot of the animal parks that a lot of American tourists and tourists from around the world want to visit. So be sure and go look at your maps so you'll learn where Tanzania is, now that you've met Mrs. Kikwete. 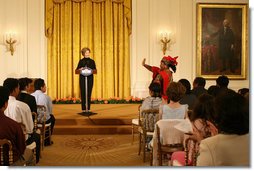 And thanks to the Ford Theatre for staging for today's performance. I know that all of you have studied Abraham Lincoln at your schools, so you know that many people believe that Abraham Lincoln was one of our most influential Presidents. President Bush keeps a portrait of President Lincoln in his office. It reminds him of how President Lincoln faced the most difficult challenge in our nation's history, when our country was at war with itself, the Civil War.

Less than a week after the Civil War ended, on April 14, 1865, President Lincoln was assassinated while watching a play at Ford's Theatre. We have President Lincoln to thank today for -- because we are now one nation. He had the goal for our country to unify right after the Civil War. He wanted our country to be one country again. And so we have him to thank for that.

Many of you also may know that President Lincoln is the one who signed the Emancipation Proclamation that freed the slaves. And he signed that proclamation right upstairs in what's called the Lincoln Bedroom, but was Lincoln's office when Lincoln lived here.

Ford's Theatre is a theatre right here, right downtown. I hope some of you have been to it before. It's closed right now while it's being renovated and restored. But when it reopens, Ford's Theatre will offer students and teachers new ways to learn about Abraham Lincoln and his legacy.

Today we're just going to imagine that we're in Ford's Theatre. Imagine that I'm on the stage at Ford's Theatre and you're sitting in the chairs on the main floor. Above you are two balconies that were filled a few nights ago with happy people celebrating the end of a difficult war by watching a comedy, a funny play. Above, and to my left, is where the box is where President Lincoln watched the play with his wife and two guests. In the box is a framed picture of George Washington, and flags are festively draped around it. 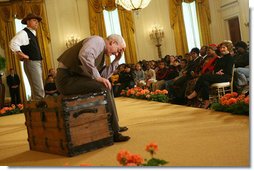 This play takes place in 1865, a few days after President Lincoln died. It shows this tragic event through the eyes of two people who were there -- Harry Hawk, an actor who was on stage when the President was shot; and Harry Ford, one of the owners of the theatre.

Now watch with me as Ford's Theatre presents "One Destiny," a play by Richard Hellesen, directed by Mark Ramont, with Stephen Schmidt as Harry Ford, and Michael Bunce as Harry Hawk.