For Immediate Release
Office of the First Lady
April 7, 2008

MRS. BUSH: Thank you very much, Senator Hutchison. Tonight, we pay tribute to the people of Burma -- especially the women, who have inspired the world with their grace and courage in the face of brutality.

For nearly 20 years, Burma's military regime has crushed peaceful dissent and jailed thousands of political prisoners. Aung San Suu Kyi, the head of the democratically-elected National League for Democracy, has spent more than 12 years under house arrest since 1989. 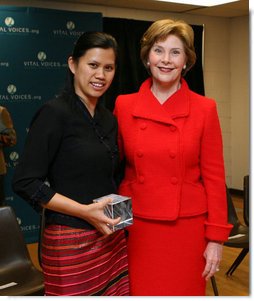 When a 500 percent spike in regime-controlled gas prices led to protests last September, the junta responded with a force that shocked the world. Unarmed monks who led the demonstrations were beaten, arrested, and killed. Bullets were sprayed into crowds of peaceful protestors, and thousands were imprisoned under shameful conditions. Arrests and beatings of peaceful activists continue today, and demonstrators remain incarcerated.

Tonight we join Vital Voices in honoring the women of Burma for their courage in the fight for democracy and basic human rights. Aung Sang Suu Kyi is not alone in her vision. We recognize women like Su Su Nway, a labor activist jailed for participating in September's "Saffron Revolution"; Nilar Thein, forced to leave her newborn child to hide from military persecutors; and the more than 100 brave dissidents still missing or imprisoned because they chose to raise their voices. We stand with each of you.

Receiving the award on behalf of the women of Burma is Charm Tong. Charm's parents put her in an orphanage in Thailand at the age of six to protect her from violence in the Shan region of Burma. She grew up among refugees from her homeland. At the age of 17, she stood before the United Nations Commission on Human Rights to describe the military campaign being carried out against her people. She spoke unflinchingly of rape and abuse, though her audience included representatives of the regime she condemned.

She co-founded the Shan Women's Action Network. Their 2002 report -- "License to Rape" -- opened the world's eyes by documenting the rape of more than 600 women by Burmese troops. She's also established a school for Shan State youth who have fled Burma but who are denied access to refugee camps in Thailand. The students call her "a candle in the dark." For her part, she says, "The regime does not want the world to know what's happening to the people, but our women's voices will be heard."

A second recipient was unable to be here tonight. Khin Ohmar is one of the strongest voices against Burma's violent regime. As arrests and crackdowns on dissidents continue, she felt she must miss tonight's gala to continue her important work.

For their determination to expose the oppression of the Burmese people and for courageously raising their "Vital Voices" in defense of democracy, Vital Voices is proud to honor Charm Tong and the women of Burma. (Applause.)