For Immediate Release
Office of the Press Secretary
April 7, 2008

THE PRESIDENT: Thank you. Please be seated. I want to thank members of my Cabinet for joining me here today. Madam Ambassador, thank you for coming. I appreciate those who support free trade and fair trade for joining us on this important occasion. In a few minutes, I will sign a letter to Congress that will transmit legislation implementing the United States' free trade agreement with Colombia. This agreement will advance America's national security interests in a critical region. It will strengthen a courageous ally in our hemisphere. It will help America's economy and America's workers at a vital time. It deserves bipartisan support from the United States Congress. 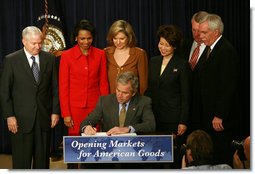 During the 16 months since the Colombia free trade agreement was signed, my administration has worked closely with the Congress to seek a bipartisan path for considering the agreement. We held more than 400 consultations and meetings and calls. We led trips to Colombia for more than 50 members of the Congress. We worked closely with congressional leaders from both parties -- including the Speaker, Leader Hoyer and Chairman Rangel, Minority Leader Boehner, Ranking Member McCrery, and Senators Baucus and Grassley.

On May 10th last year, my administration and congressional leaders concluded a bipartisan agreement that provided a clear path for advancing free trade agreements, including the agreement with Colombia. As part of that agreement, we included the strongest labor and environmental provisions of any free trade agreement in history. These provisions were negotiated with -- and agreed [to] by -- by the leadership of Congress -- like the Democratic leadership in Congress.

For the last 16 months, we've worked with congressional leaders to set a schedule for the consideration of the Colombian free trade agreement. While we'll continue to work closely with Congress, the need for this agreement is too urgent -- the stakes for our national security are too high -- to allow this year to end without a vote. By statute, Congress has 90 legislative days to complete action once I transmit a bill implementing this agreement. Waiting any longer to send up the legislation would run the risk of Congress adjourning without the agreement ever getting voted on.

Transmitting the agreement is neither the beginning nor the end of our cooperative efforts, but instead an important milestone. My administration is eager to work with members from both parties to make sure the vote is a positive one. Congress needs to move forward with the Colombian agreement, and they need to approve it as quickly as possible. 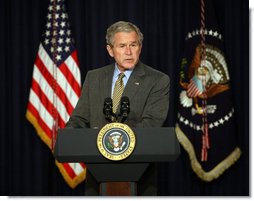 Approving this agreement is urgent for our national security reasons. Colombia is one of our strongest allies in the Western Hemisphere. They are led by a very strong and courageous leader, President Uribe. He's taken courageous stands to defend our shared democratic values. He has been a strong and capable partner in fighting drugs and crime and terror. And he's delivering results. The Colombian government reports that since 2002, kidnappings, terrorist attacks, and murders are all down substantially, as is violence against union members.

Despite this progress, Colombia remains under intense pressure in the region. It faces a continuing assault from the terrorist network known as FARC, which has seized hostages and murdered innocent folks -- including Americans -- in an attempt to overthrow Colombia's democracy. Colombia also faces a hostile and anti-American regime in Venezuela which has met with FARC terrorist leaders and deployed troops to the Colombian border as a means of intimidating the Colombian government and its people.

President Uribe has stood strong against these threats. And he has done so with the assurance of America's support, because his fight against tyranny and terror is a fight that we share. President Uribe has told members of Congress as me -- and me, as well, that approving the free trade agreement is one of the most important ways that America can demonstrate our support for Colombia. People throughout the hemisphere are watching to see what the United States will do. If Congress fails to approve this agreement, it would not only abandon a brave ally -- it would send a signal throughout the region that America cannot be counted on to support its friends. As Canadian Prime Minister Stephen Harper has said: "If the U.S. turns its back on its friends in Colombia, this will set back our cause far more than any Latin American dictator could hope to achieve."

Approving the free trade agreement will also strengthen our economy. Today, almost all of Colombian exports enter the United States duty-free, while American products exported to Colombia face tariffs of up to 35 percent for non-agricultural goods and much higher for many agricultural products. In other words, the current situation is one-sided. Our markets are open to Colombian products, but barriers exist that make it harder to sell American products in Colombia. I think it makes sense to remedy this situation. I think it makes sense for Americans' goods and services to be treated just like Colombia's goods and services are treated. So it's time to level the playing field.

As soon as it is implemented, the agreement I'm sending Congress will eliminate tariffs on more than 80 percent of American exports of industrial and consumer goods. Many products in key American sectors such as agriculture and construction equipment, aircraft and auto parts, and medical and scientific equipment will enter Colombia duty-free. If you're an American farmer, it's in your interest that this agreement get passed -- after all, farm exports like high-quality beef, cotton, wheat, soybeans and fruit will enter duty-free. And in time this agreement will eliminate tariffs on all American exports to Colombia.

Level [sic] the playing field for American exporters is especially important during this time of economic uncertainty. Last year, exports accounted for more than 40 percent of America's total economic growth. With the economy slowing recently, we should be doing everything we can to open up new opportunities for growth. More than 9,000 American companies, most of them small and mid-sized businesses, export to Colombia. Approving this agreement will help them increase their sales and grow their businesses and create good high-paying jobs.

The economic effects of expanding trade in goods and services are overwhelmingly positive, but trade can also have a negative impact for some of our citizens. In those cases, government has a responsibility to help workers obtain the skills they need to successfully reenter the workforce. My administration is actively engaged in discussions on legislation to improve and reauthorize Trade Adjustment Assistance program. We're committed to advancing those discussions as quickly as possible. I look forward to completing an agreement on trade adjustment that draws on many of the good ideas contained in bills introduced in the House and the Senate -- I look forward to signing a good bipartisan piece of legislation.

In discussions about the Colombia free trade agreement, some members of Congress have raised concerns about the conditions in Colombia. President Uribe has addressed these issues. He's addressed violence by demobilizing tens of thousands of paramilitary figures and fighters. He's addressed attacks on trade unionists by stepping up funding for prosecutions, establishing an independent prosecutors unit, and creating a special program that protects labor activists. He's made clear that the economic benefits the agreement brings to Colombia would strengthen the fight against drugs and terror, by creating a more hopeful alternative for the people of Colombia.

If this isn't enough to earn America's support, what is? President Uribe has done everything asked of him. While Colombia is still working to improve, the progress is undeniable -- and it is worthy of our support.

The stakes are high in South America. By acting at this critical moment, we can show a watching world that America will honor its commitments. We can provide a powerful rebuke to dictators and demagogues in our backyard. We can expand U.S. exports and export-related jobs. We can show millions across the hemisphere that democracy and free enterprise lead to a better life. Congress's path is clear: Members should have a healthy debate, hold a timely vote, and send the bill implementing the Colombia free trade agreement to my desk, so I can sign it into law.

And now I would like members of my Cabinet who are here today to join me for the signing of the letter.

(The letter is signed.)