For Immediate Release
Office of the Press Secretary
April 3, 2008

THE PRESIDENT: Mr. Secretary General, President Basescu, thank you all very much. For nearly six decades the NATO Alliance has been the hope of a world moving toward freedom and justice, and away from patterns of conflict and fear. During times of great challenge we have advanced our ideals. We've stood form in defending -- firm in defending them, and we have offered NATO's promise to nations willing to undertake the hard work and sacrifices required of its members. 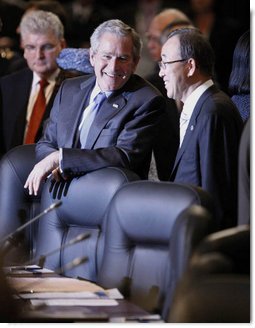 Since the end of the Cold War, NATO has welcomed 10 liberated nations to its ranks. These countries have brought new ideas, new enthusiasm and new vigor. NATO's embrace of these new members has made Europe stronger, safer and freer. These countries have made our Alliance more relevant to the dangers we confront in the new century.

In Bucharest, we're inviting more nations to join us. I'm pleased that the Alliance has agreed to invite Albania and Croatia to become members of NATO. Both these nations have demonstrated the ability and the willingness to provide strong and enduring contributions to NATO. Both have undertaken challenging political, economic and defense reforms. Both have deployed their forces on NATO missions. Albania and Croatia are ready for the responsibility NATO brings, and they will make outstanding members of this Alliance.

We regret that we were not able to reach consensus today to invite Macedonia to join the Alliance. Macedonia has made difficult reforms at home. It is making major contributions to NATO missions abroad. The name issue needs to be resolved quickly, so that Macedonia can be welcomed into NATO as soon as possible.

In the interim, NATO needs to intensify its engagement with Macedonia to make sure that NATO looks forward to the day when Macedonia takes its place among the members of the Atlantic Alliance.

The United States and all members of the Alliance strongly support the aspirations of their people. And we pledge to stand with them as they continue to work on reform. Together we will continue to help build a Europe that is stable, strong and free. We'll bring more stability to a once troubled Balkan region. We will be able to demonstrate the benefits that come from siding with the forces of freedom.

NATO's door must remain open to other nations in Europe that share our love for liberty, and demonstrate a commitment to reform, and seek to strengthen their ties with the transatlantic community. We must give other nations seeking membership a full and fair hearing. As we invite new members today we're also clear that the progress of enlargement will continue. 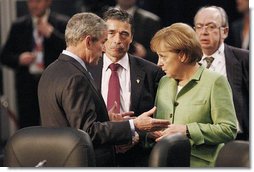 The Alliance has always welcomed those willing to make the sacrifices necessary to protect our nations and serve as forces for peace. And that is what's made our Alliance unbreakable, and that is why NATO remains the most successful alliance in history on behalf of human freedom.

Congratulations. And thank you. 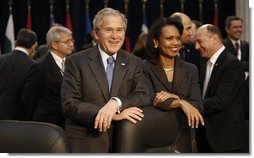