For Immediate Release
Office of the First Lady
April 3, 2008

MRS. BUSH: Thank you very much, Ambassador Maior. Thank you for that very kind introduction. And thanks to each one of you for this opportunity to discuss an issue that's very important to me, and that is the progress that's being made by the courageous people of Afghanistan.

I especially welcome the participation today of your peers from Kabul University and from the American University of Afghanistan. I send a special greeting to each one of you. 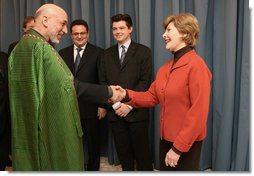 Ambassador Hunter, who is the President of the Atlantic Treaty Association; Mr. Frederick Kempe, President and CEO of the Atlantic Council; Mr. Alexandru Serban, who is the Executive President of Euro-Atlantic Council, Romania; and Dr. Professor Abdul Rahman Ashraf, the Chancellor of Kabul University, who is joining us today by videoconference -- thank you very much. And Mr. Parwez Besmel, the Foreign Relations and Cultural Affairs Director of Kabul University also participating from Kabul -- from Afghanistan. I'd also like to recognize Dr. Moulakis, the Chief Academic Officer and Vice President of American University of Afghanistan who is participating from Afghanistan.

Today in Afghanistan, we have this chance to have this meeting together. A few short years ago today's assembly would not have been possible. Kabul University's doors had been closed by the Taliban. Only 900,000 children attended school nationwide -- and none of them were girls.

Today, more than 5 million children are in school in Afghanistan, including almost 2 million girls. There are approximately 7,000 students at Kabul University, nearly 2,000 of whom are women. The Afghan economy is growing, access to basic health care services has dramatically expanded, and the child mortality rate has dropped by 25 percent in the past five years.

This progress has been supported by contributions from the United States, from our 25 NATO allies, and 15 partner nations. But credit belongs to the citizens of Afghanistan -- citizens like the 8 million voters who bravely chose their first elected president in 2004. Citizens like the more than 120,000 Afghans who have joined their National Security Forces since 2002. And citizens like the ones who are participating today from Kabul University. 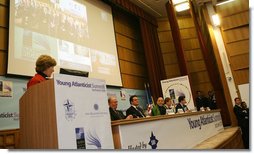 Many of you are students of law. All of you know firsthand that stable democracies require more than elections. Your country's long-term stability depends on its capacity to build and sustain the institutions of civic society. Yet decades of conflict and repression have chased away many of those who would traditionally rise to this challenge. Now more than ever, students like each of you have the responsibility to ensure that rule of law triumphs in your homeland.

As a partner in the NATO Alliance, the United States is dedicated to helping you succeed. Since 2002, the U.S. has provided $343 million in funding for Afghan education initiatives, and an additional $91 million has been requested in the 2008 budget.

Kabul University is one of 16 universities in Afghanistan now receiving U.S. support. I've seen firsthand the benefits of this assistance. I visited the National Women's Dormitory and the Women's Teacher Training Institute in 2005. Today, this dormitory is giving more than 500 women a safe place to live while they study at Kabul University.

As more women become educated, they can take on even greater roles. The tens of thousands of Afghan girls who are now in school today can follow in the footsteps of courageous leaders like Habiba Sarabi, the Governor of Bamian Province, or Hasan Bano Ghazanfar, Afghanistan's Minister for Women's Affairs, and like the more than 80 female members of Afghanistan's parliament.

The U.S.-Afghan Women's Council, announced in 2002 by Presidents Bush and Karzai, is encouraging individual American citizens to make a personal investment in the success of Afghan women and their families. By combining the resources of the public and private sector, the Council is empowering women through initiatives such as literacy programs and the Women's Teacher Training Institute, trainings for female judges and lawyers, and the extension of micro-credit loans for Afghan entrepreneurs.

The signs of progress in Afghanistan are heartening, but much work remains. The United States is committing to help the people of Afghanistan achieve the goal of a stable and democratic future. To translate the opportunities of education into a lasting contribution to your country's success, I challenge the students of Afghanistan to continue to work together.

To the other young leaders who are here with me today in this room, I urge you to learn more about the challenges faced by your peers in Afghanistan. Your participation in the Young Atlanticist Summit complements NATO's history as a great alliance of freedom. By supporting Afghanistan's young democracy, we can honor this decades-long commitment and help expand liberty for all.

Thank you all very much, and special thanks to the students from Afghanistan. (Applause.)