For Immediate Release
Office of the Press Secretary
April 2, 2008

PRESIDENT BUSH: Mr. Secretary, thank you for your time. Thank you for organizing the Bucharest summit. I appreciate your service very much to the cause of real peace, and I want to thank you for your briefing. I'm, like you, optimistic that this is going to be a very successful summit. 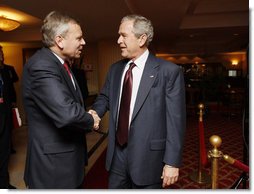 We came in with some objectives in mind. One was to get NATO to continue to support Afghanistan's democracy. And I feel good about what I'm hearing from my fellow leaders about their desire to support Afghanistan. And I think if tomorrow we get clarification on troop support, I think the people of Afghanistan -- the way you indicated it may be -- the people of Afghanistan are going to be more than grateful. And the people who these nations are represented in NATO will be supporting a cause that is worthy, a cause for peace.

Secondly, you and I discussed the need for a comprehensive missile defense regime out of NATO, and it looks like to me that the ingredients are coming together where that could be a distinct possibility. And that would be a very important statement because NATO could assure its members and the people within NATO that there would be defenses available to prevent a Middle Eastern nation, for example, from launching a strike which could harm our security.

We've also talked, obviously, about enlargement. And we'll see, on enlargement. There's an issue with one country, in particular, but it -- I'm optimistic that it will get solved. And finally, of course, Ukraine and Georgia is a very difficult issue for some nations here. It's not for me. I think that these nations are qualified nations to apply for Membership Application. And I said so on Ukrainian soil; I also said so in the Oval Office with the President of Georgia. And I haven't changed my mind, because it's -- one of the great things about NATO is it encourages the kind of habits that are necessary for peace to exist.

And today in a press conference, I was asked, Mr. Secretary General, about Russia's reactions. I said I have always told Vladimir Putin, my friend, that it's in his interest that there be democracies on her border, and that he doesn't need to fear NATO; he ought to welcome NATO because NATO is a group of nations dedicated to peace. And so I appreciate your hard work and I'm excited about tomorrow's -- about tonight's meeting, and tomorrow's meetings, as well.

SECRETARY GENERAL DE HOOP SCHEFFER: Mr. President, thank you for having us and your Afghanistan position. I can share your, and echo your opinion I think on NATO's key operational priority, which is Afghanistan. We will do well. We will do well in the political sense because we will publish a vision document, as we call it, which is a clear sign of our commitments not only of NATO, but of the whole international community -- long-term commitment vis-a-vis Afghanistan, which is important for them, for the Afghan people, but is also important for the reason that said we should not forget that we are on one of the front lines in a fight against terrorism in Afghanistan. And that is a major argument and a major reason that we -- reason that we cannot afford not to prevail. And we are prevailing in Afghanistan. So I think that's good news. And President Karzai, whom I spoke this morning, reconfirms that feeling.

I'm optimistic about enlargement, Mr. President. I think that enlarging the NATO family of democratic nations, this value-based organization, is a plus, and I hope that tomorrow will see invitations.

I also hope that we'll see a positive and constructive meeting with President Putin and the NATO-Russia Council, with the right tone and the right ambition for practical cooperation.

Like you, Mr. President, I'm optimism about -- optimistic about missile defense. I think the Alliance will -- will take a clear position on missile defense, recognizing the threat and working on the answers to that recognized threat.

And last but not least, Mr. President, you mentioned another issue which will be discussed, Membership Action Plan for Ukraine and Georgia. I think this can never be a question of "whether." The "whether" is not questionable. If these nations fulfill the criteria, and if they want to enter -- want to enter themselves through NATO's open door, I think that door should be open. So that is a discussion that certainly -- we certainly are going to have.

We have a large agenda, we have a full agenda. It will be not only NATO's biggest summit ever, but it will also be a very interesting political summit with, I think, very good results. Mr. President, once again, thank you for having us.