For Immediate Release
Office of the Press Secretary
April 1, 2008

PRESIDENT YUSHCHENKO: Dear Mr. President, dear Mrs. Bush, dear guests and ladies and gentlemen. It is with great pleasure that I express my feelings of utmost respect for His Excellency, President George Bush. The active cooperation between our countries extends from the idea of a partnership focused on the future. And I'm especially impressed that this philosophy forms the basis of the primary document we signed today, the road map of relations between Ukraine and the United States of America, and in other documents signed during your visit. 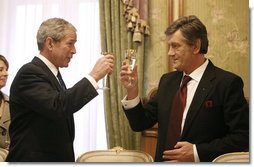 Common values and concepts for strengthening democracy, peace and security unite our countries, enlarging our joint agenda and posing new tasks before us. I am convinced that the widest political, civil and business circles of both our countries will actively contribute to strengthening the foundation of our partnership, which has withstood the test of time.

Dear ladies and gentlemen, Ukrainians highly value the support by the United States of our aspirations to honor the memory of the victims of the Holodomor of 1932 to '33 in Ukraine. We will be immeasurably grateful for the United States' recognition of this crime by the totalitarian regime as an act of genocide directed against our nation. Ukraine shall always remember the honored names of American researchers James Mace, Robert Conquest, and others whose work to introduce a tragic truth about the famine to the world was invaluable.

Dear ladies and gentlemen, we sincerely thank the United States for its support of Ukraine along the way to membership in the World Trade Organization. With the conclusion of this process, before us lies an open road to the fundamental expansion of our relations in the trade and investment areas.

We are delighted to invite our American partners to focus joint efforts in the areas of high technology, energy conservation, developing alternative energy sources, and agriculture. I am convinced that in the nearest future, we can anticipate new goals and promising ideas and joint projects. We especially highly value the support and assistance of the United States in Ukraine's advance along the path of Euro-Atlantic integration.

Today we look forward to a specific and clear signal from NATO, which will attest to the transition of our relations to a qualitatively new level. I am firmly convinced that the accession of our country to the NATO Membership Action Plan will benefit both parties. This shall be a formidable contribution to the creation of a new European security architecture, extending and strengthening freedom, democracy and human rights in the Euro-Atlantic states.

I am sincerely grateful to the United States, and personally to President Bush, for the consistent and persistent support of Ukraine's aspirations to become an integral part of the collective security system in Europe.

Dear friends, I am certain that we will use the chance we have been given to benefit today's and future generations of the people of our countries. I believe in our joint success. The United States' support as a partner strengthens my determination.

I raise my glass to the future of our cooperation, to the health of the President and Mrs. Bush, and for our nations and our friends.

PRESIDENT BUSH: Mr. President, Mrs. Yushchenko; Prime Minister; Mr. Chairman; distinguished guests, thank you for your warm welcome. Laura and I are honored to sit with you on Ukrainian soil, and we bring the greetings of the American people, or as you'd say, "Vitaiyu Vas." (Laughter and Applause.)

The people of Ukraine have made great contributions to the history of human freedom. During World War II, Ukrainian soldiers helped defeat the armies of fascism and end the deadliest conflict in history. And at the end of the Cold War, Ukrainians formed an independent nation and declared her desire to live in freedom and peace.

In 2004, Ukrainians inspired the world with the Orange Revolution, using peaceful demonstrations to protect your right to choose your leaders. Today, Ukrainians are showing courage in helping to advance freedom in many parts of the world. You're helping to train security forces in Iraq, supporting a provincial reconstruction team in Afghanistan. Ukrainians are part of the U.N. Mission in Kosovo. Last month in Kosovo a Ukrainian police officer gave his life, and many others were wounded helping to defend the ideals of freedom.

Ukraine is contributing to every mission of the NATO Alliance, and honoring the ideals that unite the transatlantic community. This week, Ukraine seeks to strengthen its transatlantic ties through a NATO Membership Action Plan. The United States strongly supports your request. We are proud to stand with you in Bucharest and beyond.

Mr. President, our two nations share a common vision for the future. We seek to advance a cause of freedom, and help all peoples of Europe live together in security and peace. With great confidence in that future, I offer a toast to you, to your gracious wife, and to a free and sovereign people of Ukraine.