For Immediate Release
Office of the Press Secretary
March 28, 2008

THE PRESIDENT: Thank you very much. I really want to thank Congressman Chris Smith and Vito Fossella for joining me here in Freehold, New Jersey. I'm here at a company called Novadebt, and I really appreciate Joel Greenberg and Jill Feldman for giving me an opportunity to come to this center, this company, and talk with people whose lives are being positively affected as a result of a significant counseling effort to help people stay in their homes. And I really do want to thank you all for your hospitality. 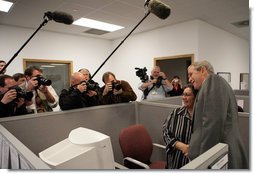 During my tour, I have met with skilled professionals who provide free mortgage counseling for struggling homeowners. And the reason why I'm here is because we have got a issue in housing in America. The value of the houses have gone down in some areas, and people's mortgages are resetting. In other words, the interest rates are going up. And that has caused consternation and concern and care. A lot of families are facing the frightening prospect of foreclosures. Foreclosures obviously place a terrible burden on a family, as well as they lead to losses for lenders and investors. And this affects our entire economy.

We have a role to play at the government level, and that is to help lenders and borrowers work together to avoid foreclosure. There's some homeowners who have made responsible buying decisions, and who could keep their homes with just a little help, some information and some help. And so to help them, in October my administration helped bring together a private-sector group of lenders, loan servicers, investors, mortgage counselors, which is called the HOPE NOW Alliance. And the members of this group have made some progress. First of all, they agreed to industry-wide standards to streamline the process for refinancing and modifying certain mortgages. HOPE NOW also runs a national hotline to connect struggling homeowners with mortgage counselors just like the folks here at Novadebt.

I also met with some homeowners who got help. Danny Cerchiaro is with us, from Iselin, New Jersey. Thank you for being here, Danny. He owns a home that also serves as a studio for his movie production business. Danny and his wife learned their adjustable-rate mortgage was resetting to a higher rate this past summer, and he became concerned about financial stability. He was worried about staying in his home. He needed a place for his business and he needed a place to sleep, and he became concerned about whether or not he could afford it.

He got -- he called HOPE NOW, and he became working with a mortgage counselor named Penny Meredith. Penny is here. Appreciate you coming, Penny. And in less than two months later, Penny helped Danny get a more affordable fixed-rate mortgage. Danny calls Penny -- and I quote -- "the magic lady." She helped him a lot.

And there's a lot of other Americans who can get the same kind of help. One of the reasons I've come today is to say to people who are worried about staying in their home, there is help available. 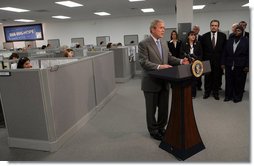 I also want to thank Theresa Torres, from Kansas City, who is with us. She got really worried. She's a mom of three; her husband is a subcontractor. And she was very worried about staying in her home. And the family fell behind on their mortgage payments in December. But fortunately, she knew to call and to get help, and in this case, from Novadebt. They helped her modify her mortgage. And today, as a result of the help she received, she no longer worries about losing her home. And I thought her statement was pretty interesting -- she said, "I see my role today to serve as an example for people in a similar situation." So, Theresa, we're glad you're here.

There are hundreds of thousands of homeowners like Theresa and Danny who can benefit from calling HOPE NOW. And so one of my purposes is to make it clear there is a place where you can get counseling. And I want my fellow citizens, if you're worried about your home, to call this number: 188-995-HOPE [sic]. Let me repeat that again: 188-995-HOPE [sic].

HOPE NOW can help homeowners find the right solution. By the way, we got more work to do in Washington, and one of the things we can do is make sure the Federal Housing Administration gets the reforms it needs. And there's a program called FHASecure, which has given FHA greater flexibility to offer struggling homeowners with otherwise good credit histories a chance to refinance. This program is very helpful. It's, so far, helped 130,000 families refinance their mortgages. And by the end of the year, we expect the program to have reached 300,000 families.

This is a good start. We want to help people. We're committed to helping our fellow citizens. And I fully understand, as do most Americans, that the housing market problems are complicated and there's no easy solutions. But in the stories I've heard today I've seen how Americans are responding with compassion and determination. We will support them with good policies. We will help responsible homeowners weather a difficult period. And in so doing, we will strengthen the dream of homeownership. 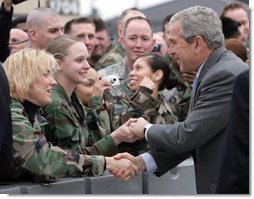