For Immediate Release
Office of the Press Secretary
March 25, 2008

PRESIDENT BUSH: Your Majesty, welcome back to Washington. It is such a pleasure to see you. I still have such fond memories of our trip to the Kingdom of Bahrain. His Majesty and I were reminiscing about the sword dance that you put on. It was spectacular. And you've got a -- not only do you have a beautiful country, but you've got a prosperous country, and a country that is a great friend of the United States. And it's such a honor to welcome you back here. 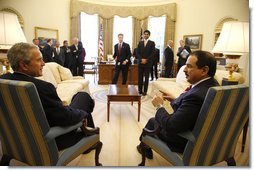 We had a good discussion, and we'll continue our discussion over lunch, on a variety of subjects. First, I do want to thank the Kingdom for sending an ambassador to Iraq. That's a very strong move that indicates a willingness to lead, as well as a willingness to send a signal that when a young democracy like Iraq is beginning to make progress, that it is important for the neighborhood to recognize that progress. And I really do want to thank Your Majesty for that.

We talked about security measures, the need to work together on joint security operations. I congratulated His Majesty on Bahrain's leadership of a joint task force that's -- that is enabling nations to learn how to work together in order to keep the peace.

All in all, it's been what you would expect -- a visit that's cordial and comfortable and amongst friends. And so, Your Majesty, welcome back, and thank you for coming.

HIS MAJESTY KING HAMAD: Thank you. I would like to thank the President for his kind invitation and his great support to Bahrain, and to the stability and prosperity of our region.

And concerning sending back ambassador -- an ambassador to Iraq, Iraq is an Arab state. Iraq is a founder of the Arab League. So it deserves all the support that it can get from other brother Arabs.

And the discussion today focused on bilateral relations concerning the free trade agreement which we have signed, and concerning the energy, as well, which yesterday was signed by the Secretary of State and our Foreign Minister. And we talked about security matters, which really are the most important issue, for maintaining the development and the prosperity in our region.

And I came all the way to thank the President for what he has done for Bahrain, and for our region and for the whole world stability and security, in fighting terrorism and extremism. And we hope we achieve our common goals by having a stable world.

So, thank you, Mr. President.

THE PRESIDENT: Thank you, Majesty.