For Immediate Release
Office of the Vice President
March 23, 2008

PRESIDENT PERES: Mr. Vice President, I would like to welcome you upon your visit at this time, in this place. I think time is of essence, and we don't have too much time, but this is the finale maybe of a very long trip here in the Middle East. And we have to try, all of us, to make the best of it.

I do believe there are some things that are still achievable, in spite of the shortage of the time. We are actually dealing on three different issues one is political negotiations about peace. It will take a little bit longer than we would like to, but I believe they are making some progress. Actually, I wouldn't underestimate its importance. The mere fact that in spite of the differences the negotiations go on is a great hope for the future. 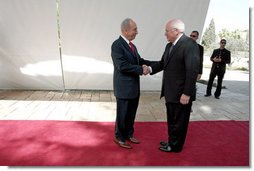 The second is the economic trail. I do believe that we have to make a supreme effort, before the visit of the President here on May, and things can be concluded into the mains. One is in building industrial parks in the West Bank to help the Palestinian Authority to gain economic strengths to overcome some other weaknesses, and the other is what we call the "valley of peace," between the Jordanians and ourselves, that can inject a great deal of economic hope in the veins of the Jordanian kingdom, of the Palestinian Authority, and of Israel.

It's a workable project. It may take less time than we think. By the way, on the two projects, so the finances are coming from different sources. The finances are made up -- doesn't depend upon governmental money.

And then we have this problem of the Iranians, who wants to build their two satellites -- the Hezbollah in Lebanon, and the Hamas in Gaza. And with all our search for good neighbors, we would like that the Iranians be represented on our borders; take it very seriously. Nobody can console us and say that the declarations of Ahmadinejad are less serious than they are; we have to take it seriously, out of experience.

You are a man of great experience and of great knowledge. And I think your counsel and maybe facilitation of the situation can be of great help right away, even for the visit of a short while. We have to make the most of it and the best use of it, and clearly together we can probably contribute quite a while to those three problems.

VICE PRESIDENT CHENEY: I want to thank you, Mr. President, for welcoming me back again to Israel. I remember when we first met many years ago, when you were Defense Minister --

PRESIDENT PERES: Both of us.

VICE PRESIDENT CHENEY: Both of us, yes. This was before I was defense minister. This was Rumsfeld's first time as defense minister. But we've known each other for many, many years, and I've always admired, had great respect for your contribution, not only to issues that affected your government, but on broader international basis, too.

We're obviously dedicated to doing all we can as an administration to try to move the peace process forward, and also obviously actively involved in dealing with the threats that we see emerging in the region -- not only threats to Israel, but threats to the United States, as well. 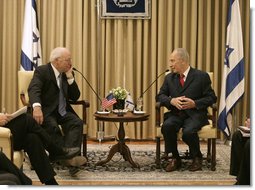 So I'm here today to share some thoughts with you. The President looks forward very much to his return visit in May to celebrate the 60th anniversary of the founding of Israel. So we're spending a good deal of time these days on issues related to our friends here in Israel. I'm delighted to be back.

PRESIDENT PERES: Thank you very much.