For Immediate Release
Office of the Vice President
March 23, 2008

PRESIDENT ABBAS: (As translated.) In the name of God the merciful and the compassionate, Mr. Vice President Dick Cheney, it is my pleasure to welcome you here in our country, Palestine, as a dear guest.

Your visit comes at a time when we are exerting our utmost efforts to reach a comprehensive and just peace with our Israeli neighbors. This peace is based upon the international resolution and the vision of the President George Bush, and the road map plan, and the Arab initiative for peace, which would lead independently to end occupation -- Israeli occupation -- that started in 1967, and the establishment of an independent Palestinian state, with its capital, Jerusalem, East Jerusalem, that lives in peace and stability alongside the state of Israel and all neighboring countries. 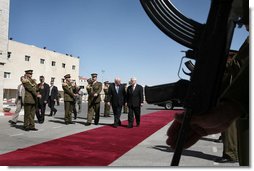 We appreciate the efforts that your administration is exerting, and the commitment of President George Bush to the two state solution and the hosting of the important Annapolis conference, and his insistence on reaching and concluding a peace, an Israeli peace, Palestinian-Israeli agreement by the end of the year 2008, as well as the ongoing and persevering work of Secretary of State, Dr. Rice.

Peace and stability will not be achieved through a settlement expansion, or the setting up of checkpoints around towns and villages, and the military escalation against Gaza, nor the incursions, continuous incursions into West Bank villages and towns, as well as the arrest which led to more than 11,000 prisoners in the Israeli jails.

We also reiterate our condemnation and rejection for the firing of missiles being launched from Gaza against Israel. We believe in a genuine peace, that would put an end to this long conflict that is causing a focus of tensions in the region, if not at the international level.

The requirements of the peace between the two sides are very clear. And what is required is good will and the courage, and strong support from the international community -- particularly the United States of America -- and effective contribution from the quartet. This is the spirit of the Annapolis conference that we need to observe and maintain. The required peace and desired peace is one that addresses all core issues, final status negotiation issues, without exception, particularly Jerusalem, the refugees. And if this peace is established, then its first results would be to weaken the extremist forces and the creation of a regional environment for cooperation and good neighborhood relations.

I thank you, Mr. Vice President, for your assistance to our people, and most recently, that we received $150 million support to the PA budget. And we hope that through your continuous support and your participation, also at the Moscow conference to follow up on Annapolis conference and accomplishments, as well as the other security, economic and investment conferences in Bethlehem, London and Berlin.

VICE PRESIDENT CHENEY: Thank you, President Abbas. I want to thank you for your hospitality, and for welcoming me here today. The President and I have just completed a good meeting, and in a few moments I'll have the opportunity to sit down for further for further discussions with Prime Minister Fayyad.

I'm pleased to bring good wishes to the Palestinian people from President Bush, and from the people of the United States. My arrival here today comes, of course, only two months after President Bush's historic visit to Ramallah. I come, at his direction, to give further support and encouragement to the Palestinian leaders in their vital negotiations with the leaders of Israel.

As President Abbas has pointed out, George W. Bush is the first president of the United States to endorse the establishment of an independent Palestinian State. Our administration is strongly committed to that objective, and we look forward to the day that an independent, viable, democratic, and peaceful Palestinian State comes into being.

Achieving that vision will require tremendous effort at the negotiating table, and painful concessions on both sides. It will also require a determination to defeat those who are committed to violence and who refuse to accept the basic right of the other side to exist. A difficult but immutable truth must continue to be told: terror and rockets do not merely kill innocent civilians, they also kill legitimate hopes and aspirations of the Palestinian people.

A negotiated end to the Israeli-Palestinian conflict, one that addresses the legitimate national claims of both peoples, would have limitless value. Years of mistrust and violence have achieved nothing. And the extremists who have stood in the way of a settlement have only caused further grief and suffering for the Palestinian and Israeli peoples. No one deserves to go through life in a climate of fear, or deprivation, or dreading what the next day may bring. That should not be, and must not be, the direction of events in this region. The future belongs to the advocates of peace and reconciliation, if only they seize the opportunities in front of them and maintain the resolve to join in defeating the forces of terror and extremism.

Across this region, men and women of good will are many in number. They have the character and the resolve to bring about a settlement that is durable and fair to all concerned. And they can be assured of America's help as they work to that end. 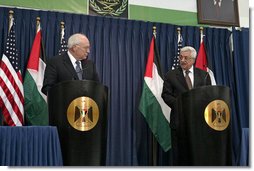 As President Bush has said, "The establishment of the state of Palestine is long overdue. The Palestinian people deserve it." The United States will commit resources to help the Palestinians build the infrastructure necessary for a stable, secure and prosperous democracy, and a society led by a government that joins in the fight against terror and honors the aspirations of all its people. This can be done. And if all concerned stay at the work, success will be achieved.