For Immediate Release
Office of the Vice President
March 22, 2008

PRIME MINISTER OLMERT: Good evening. Welcome, Mr. Vice President. I'm honored and delighted to have you visiting here after five years, which was your last visit. It is particularly significant this time because you are coming in the beginning of the 60th anniversary for the state of Israel, and you were always a very good supporter and friend of the state of Israel. And we are very proud to have you with us at this time. 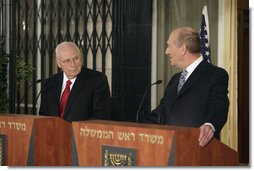 I have to add that we are going to discuss, naturally, many things tonight and Monday. There are many items on the common agenda of America and the state of Israel: We are both very concerned about Iran, we are anxious to carry on the peace negotiations with the Palestinians, we are watching very carefully the northern front, the behavior of Syria and the Hezbollah, and naturally I know how much concerned America is with the continued terrorist attacks against Israel coming from Gaza against innocent civilians in the south part of the state of Israel.

All these matters will be discussed while you are visiting here, and we will always be happy to hear your advice and your observations about these very important issues which are on the top of the agenda of the state of Israel at this part of the world.

Vice President, you were always a supporter of Israel. I remember your visit in Israel immediately after the first Gulf War, the early '90s, when you were Secretary of Defense. And throughout this period, in your different positions, you were always interested, concerned, and involved in matters which were very important for the state of Israel. I am proud that we are friendly for many years, meeting in different places, in America, and sharing the observations and the judgments about the events in different parts of the world, particularly in the Middle East.

And now I'm proud that I can host you as the Prime Minister of Israel, in the state of Israel, at this very important time to all of us. Welcome, Mr. Vice President.

VICE PRESIDENT CHENEY: Well, thank you very much, Mr. Prime Minister. I'm delighted to be in Jerusalem once again, with my old friend, the Prime Minister. And I want to thank him for the kind invitation that he extended to me and to my wife, Lynne, to visit Israel again. I've been gone too long. It's now been five years since I was last here, and I'm glad to be back. I also want to convey the good wishes of all -- to all Israelis of the people of the United States, and of our President, George W. Bush.

I'm especially pleased to be here as we celebrate the 60th anniversary of Israel's emergence as a modern nation state. The state of Israel's rise out of the ashes of World War II is one of history's great miracles. So too is the fact that Israel has survived these six decades despite often violent assaults against its very existence. At the same time, the nation has flourished, growing in population and prosperity and military strength, while making remarkable contributions to the worlds of science, culture and technology.

The founding of the new Jewish state declared on the 14th of May, 1948, at 12:00 midnight -- only 11 minutes later, by the direction of President Harry S. Truman, the United States recognized Israel. From that moment, our two countries have been more than just strong allies. We've been friends -- special friends -- and our peoples bound together by unique ties of history, culture, religion, and memory. Today, both our nations share the ideals of liberty, equality, human dignity, and representative government. Both our nations have stood firmly against the forces of terror and intimidation. Both our nations have shown a great willingness to work and sacrifice for the cause of peace. We are natural allies.

As successful democracies, the U.S. and Israel have a basic confidence in the power of freedom to lift up whole societies and to lay the foundation for peace. We will defend ourselves and protect our people. But as President Bush said here in January, "We will do more than defend ourselves. We will seek lasting peace."

History has clearly shown that when encountered by Arab partners like Anwar Sadat and the late King Hussein of Jordan, who accepted Israel's permanence and are willing and capable of delivering on their commitments, Israelis are prepared to make wrenching national sacrifices on behalf of peace. I have no doubt this is equally the case with Palestinians.

On this journey, I am reiterating the President's commitment to his vision of two democratic states, Israel and Palestine, living side by side in peace and security. He stated that vision early in his presidency, and as I like to remind people, he was the very first American President to do so.

Reaching the necessary agreement will require tough decisions and painful concessions by both sides, but America is committed to moving the process forward -- and to that end, I will meet with President Abbas and Prime Minister Fayyad. They, too, can be certain of America's good will in this process. It is not America's role to dictate the outcome. But we will help in the negotiations, and provide all the support and encouragement we can. We care deeply about these issues. We want to see a resolution to the conflict, an end to the terrorism that has caused so much grief to Israelis, and a new beginning for the Palestinian people.

Mr. Prime Minister, I'm looking forward to our discussions. We have a full agenda, filled both with opportunities and with dangers. As we continue to work for peace, we must not and will not ignore the darkening shadows of the situations in Gaza, in Lebanon, in Syria, and in Iran, and the forces there that are working to derail the hopes of the world.

Together, the United States and Israel will fulfill our responsibilities to our peoples, overcome our challenges, and continue to seek a future of security, freedom, prosperity and peace.