For Immediate Release
Office of the Vice President
March 18, 2008

VICE PRESIDENT CHENEY: Thank you very much for that warm welcome. (Applause.) That's all right. Don't hold back. I'm delighted to be here at Balad Air Base. Ladies and gentlemen, it's good to see all of you -- and of course to be here with my wife, Lynne, and our daughter, Elizabeth. The general mentioned I was born in Nebraska, but grew up in Wyoming. The way we got to Wyoming, when I was 13 years old, my dad worked for the government. General Eisenhower, then President of the United States, reorganized the Agriculture Department, and dad got transferred to Casper, where I met Lynne, and we grew up together, and went to high school together. We celebrate our 44th wedding anniversary next August. (Applause.) Anybody here who is 44 years old? (Laughter.) I often explain to people, if it hadn't been for that election in 1952, I wouldn't have moved to Wyoming, and Lynne would have married somebody else. She said, right, and now he'd be Vice President of the United States. 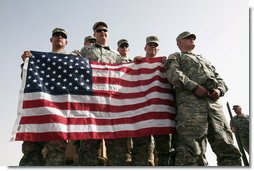 Anyway, thanks for getting up early to let us say hello. Some of you know we were in Baghdad yesterday and spent last night here on base.

I came to Iraq for meetings with General Petraeus, Ambassador Crocker, the Prime Minister, and others. Before going on to another part of the country today, I asked for the chance to say a few words to the men and women serving here at Balad. I want you to know that we appreciate you and your comrades, that we never take you for granted, that we're inspired by the tremendous work you've done on this deployment. I bring greetings from home, and good wishes to all of you from the President of the United States, George W. Bush. (Applause.)

On the President's behalf I want to thank all of you for being part of an extraordinary American team here in Iraq. This is one of our biggest bases in the country. And the work that goes on at Balad and at Camp Anaconda, around the clock, seven days a week, is absolutely critical to the mission that America has undertaken here. Balad is one of the busiest airports anywhere, and it's the main staging area for the massive logistical operations we need in this theater. From the very beginning, we've had high expectations of the men and women serving here. We've given you a lot of work to do, and at often times a very small amount of time in which to do it. And you've more than met our expectations.

Service above self is the military way of life, and that goes, of course, for everybody back home that has a loved one in the armed forces. Especially in wartime, our military families understand full well what it means to make sacrifices for the good of the country. So the next time you email your family members, please pass along my thanks to them, as well.

Each one of you has accepted serious duties in a challenging part of the world. And the job you do here has a direct impact on the security of the United States. Our country has been engaged in the broader Middle East now for generations. And the work we're doing right now provides the best chance for the security of our friends, allies, and partners and for the long-term peace of the region. 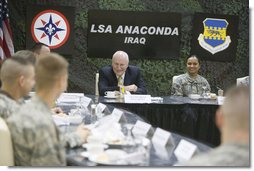 Five years ago this week, we led a coalition to liberate this country from tyranny. And we promised that we would stand by the Iraqi people as they built free institutions and took charge of their own destiny once again. America has done this kind of work before, from Europe to Asia, and it's never been easy. But we know from history that it's worth all the effort we put into it.

Freedom and democracy are the values that give hope to entire nations. You and I know what it means to be free; to choose our own leaders, to live, and work, and worship as we see fit. We wouldn't give such freedoms away. And neither would the people of Iraq or Afghanistan. But in both of those countries, they're facing attack from violent extremists who want to end all democratic progress and pull them once again in the direction of tyranny. We're helping them fight back because it's the right thing to do, and because it's important for our own long-term security. As President Bush has said, the war on terror is an ideological struggle. And as long as this part of the world "remains a place where freedom does not flourish, it will remain a place of stagnation, resentment, and violence ready for export."

This long-term struggle became urgent on the morning of September 11th, 2001. That day we saw clearly that dangers can gather far from our own shores and find us right there at home. So the United States made a decision: To hunt down the evil of terrorism and kill it where it grows, to hold the supporters of terror to account, and to confront regimes that harbor terrorists and threaten the peace. Understanding all the dangers of this new era, we have no intention of abandoning our friends, or allowing this country of 170,000 square miles to become a staging area for further attacks against Americans. Tyranny in Iraq was worth defeating. Democracy in Iraq is worth defending. (Applause.) All Americans can be certain: We intend to complete the mission, so that another generation of Americans doesn't have to come back here and do it again. (Applause.)

During this deployment, ladies and gentlemen, you've seen incredible progress on the ground in Iraq -- not just as witnesses, but as participants. A little over a year ago, we made a decisive change in our strategy -- a decision to seize the initiative against the forces of violence, to provide basic security in the capital city, to give Iraqis the opportunity and the confidence to go forward. We made a surge in operations, and the results are now clear: more effective raids to root out enemies; better and more accurate intelligence information from the locals; and higher hopes for the future from the Iraqi people. And across this country, the more that Iraqis have gotten to know Americans -- the nature of our intentions, and the character of our soldiers -- the better they've felt about the United States of America. 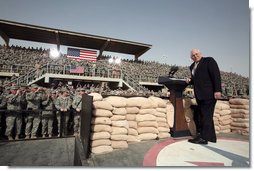 They know, above all, that America can be trusted. They know we're a nation that accepts a hard job, and keeps at it even if others may tire of the effort. And we'll continue working to help this young democracy, to be an example to others, and to be an ally in the war on terror. That war is not yet won -- but the day will come when terrorists and terror states are no longer a strategic threat to America. And you, as veterans of this fight, will always be honored and respected for what you did to defend our country, and to defeat freedom's enemies. (Applause.)

I appreciate your attention this morning -- it's been my privilege to be with all of you. Keep up the great work. And thank you for what you do for all of us. (Applause.) 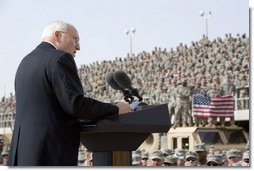 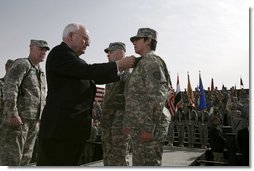 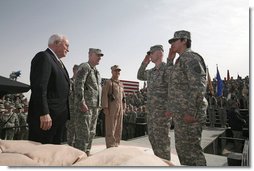 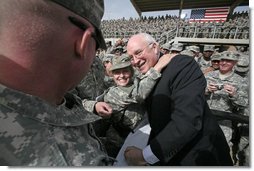 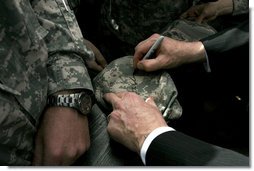