For Immediate Release
Office of the Vice President
March 18, 2008 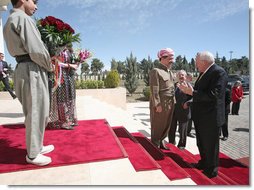 We understand very well the importance of this visit. Indeed, I would like to reiterate our commitment that we will continue to play a positive role in order to build a new Iraq -- an Iraq with a foundation of a great federal, democratic, pluralistic, free Iraq.

I would like to take this opportunity to express our thanks and appreciation for President Bush, for yourself, the people of the United States, and also the United States military, for the sacrifices that they have given, and also for the great decision that they have taken in order to liberate the people of Iraq from the dictatorial, tyrannical regime.

I would also like to take this opportunity to express our sincere condolences to the families of the victims, for all the sacrifices they have given. And we highly appreciate these sacrifices. I would also like to assure you that we will stay together, we will be with you in one trench, and without any hesitation or reservation, to fight terrorism and also to succeed in our efforts in the democratic process, and also in building a free and prosperous Iraq.

Once again, I would like to welcome you very warmly, and thank you very much for this visit.

VICE PRESIDENT CHENEY: Let me thank President Barzani for his most gracious hospitality today, for welcoming me on my first visit to Iraqi Kurdistan. It's a visit that's long overdue.

Just about 17 years ago this month, when I was Secretary of Defense, the United States launched Operation Provide Comfort, to save hundreds of thousands of Kurdish men, women and children under threat from Saddam Hussein's regime after the Gulf War.

That operation, of course, followed just by three years the nightmare of Saddam Hussein's brutal campaign against Iraqi Kurds, including the use of chemical weapons against innocent civilians at Halabja.

Provide Comfort was an extraordinary mission that led to the establishment of the American "no fly zone" over Northern Iraq. It also led to the establishment of a very special friendship between the United States and the people of Iraqi Kurdistan. The results have been quite remarkable for all to see, in terms of the development and the prosperity of this part of Iraq. The transformation that has occurred in less than two decades sets an extraordinary example, I believe, for the rest of Iraq and for what is possible, with patience and resolve, when the United States and the people of Iraq join together in a common effort and strategic partnership.

President Barzani and I, and his associates, have been talking today about the overall situation in Iraq, as well as what's happening here in Iraqi Kurdistan. We are certainly counting on President Barzani's leadership to help us conclude a new strategic relationship between the United States and Iraq, as well as to pass crucial pieces of national legislation in the months ahead.

We think it's important to lay the foundation for the kind of relationship that will bind our people together for the future as we build on the experiences and shared sacrifice that we've been -- that we've worked on together in the past.

So, Mr. President, let me thank you once again for your hospitality, and say that I look forward to having the opportunity to return the same when you visit Washington in the near future.