For Immediate Release
Office of the Vice President
March 17, 2008

PRIME MINISTER MALIKI: (As translated.) I would like to welcome the second visit of Mr. Dick Cheney, the Vice President of the United States, to Baghdad. This visit is important, because it comes at a time when there is a great deal of progress that is taking place in Iraq.

This was an opportunity, it was a very valued opportunity to have a conversation with the Vice President, and to discuss a variety of important and essential issues relating to the nature of the relationship between the two countries. 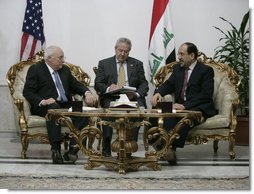 Now of course also the discussion covered the future of the relationship between the United States and Iraq, and the agreement that the two sides, with their negotiating teams, are covering these days.

Also we have discussed various security issues relating to Iraq, as well as the region, and the need to achieve more and more progress and to cement the progress that has been achieved so far. I also took the opportunity to speak with the Vice President about the importance of the success when it comes to security. We believe this is a prelude and it's important for further, future cooperation, particularly the economic cooperation between the two countries.

I found the Vice President a man who understands very well and is very keen about Iraq's success, as well as Iraq's stability and continuous progress. The frequency of these visits are very important, to continue to have visitors such as the Vice President. I believe that these visits really cement and support the relationship between the two countries, the success that we achieve in Iraq against terrorism, and in the war against terrorism, which is a global war; it is very important to have these meetings and to have these successes.

Once again, I would like to take the opportunity to reiterate my thanks for your visit, and I wish you all the success during your tour in the region.

VICE PRESIDENT CHENEY: Well, thank you, Prime Minister. It is good to be back in Iraq, see my friend, the Prime Minister, again, and many other Iraqis, as well as our American officials here: Ambassador Crocker, General Petraeus.

It's especially significant, I think, to be able to return this week as we mark the fifth anniversary of the beginning of the campaign that liberated the people of Iraq from Saddam Hussein's tyranny, and launched them on the difficult but historic road to democracy. 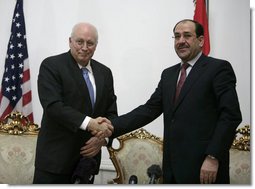 I was last in Baghdad 10 months ago, and I can sense as a result of the progress that's been made since then that there have been some phenomenal changes, in terms of the overall situation, both with respect to the security situation, where Iraqi and American forces have done some very good work, as well as with respect to political developments here in Iraq.

They've worked on landmark legislation that will be vital, in terms of shaping the future for Iraq. And without question, there has been dramatic improvement in the security situation, as well. The President asked me to come and thank the Prime Minister and other Iraqi officials for the leadership they've shown, and to reaffirm to the Iraqi people the unwavering commitment of the United States to support them in finishing the difficult work that lies ahead, and to consolidate and strengthen their democracy.

And I want to thank the Prime Minister for receiving me today, and for the efforts his government is making, in terms of producing real progress on the important agenda that our two nations are working on together.