For Immediate Release
Office of the Vice President
March 17, 2008

MR. AL-HAKIM: (As translated.) Well, today Vice President Dick Cheney came to visit Iraq, and he had a variety of meetings with senior Iraqi officials. Then he came here to visit with me. My discussions with him focused on three major issues.

The first subject of discussion focused on the strategic agreement between Iraq and the United States. And I can characterize our discussion that our views regarding the strategic agreements are identical when it comes to the principles that will guide this agreement. Among these principles, and foremost among these principles, is the protection of the full Iraqi sovereignty under the agreement as well as taking Iraq out of Chapter Seven of the United Nations. Another issue related to this agreement is to make sure that this agreement is not designed against any country in the region. 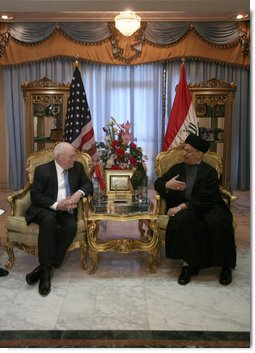 The second issue of discussions was related to the variety of legislations that have been passed and became laws by the Iraqi parliament, as well as the determination by the Iraqi parliament to legislate more laws during the next round. We believe that these were very important political developments that took place.

The third subject of discussion was related to the development on the security front. There is progress on the security front, and I reiterated our previous points before, that the Iraqi forces should be in a position to take on the responsibilities through more training, and be more equipped. We have seen progress happening to the Iraqi forces, but more is needed in order to allow Iraqis to take on these responsibilities. We have seen the performance during the past few months, and the whole world has seen that they can achieve progress.

Once again, I would like to reiterate my gratitude and thanks to Vice President Dick Cheney for coming to Iraq and coming here to visit with me.

VICE PRESIDENT CHENEY: Let me just -- excuse me -- let me say how pleased I am to be back in Baghdad, and especially able to visit the home of my friend, Sayyed Abdul-Aziz Hakim. I was last in Iraq 10 months ago and there has been a tremendous amount of progress in that period, on the security side in particular, but politically, as well. Sayyed Hakim and I had a good chance to review the situation, and I had a chance to thank him for working so hard with the United States and with Iraq's other leaders to advance the cause of Iraq's freedom and democracy.

This week, of course, marks the fifth anniversary of the beginning of the campaign that liberated the Iraqi people from Saddam Hussein's tyranny. We appreciate the important role that Sayyed Hakim has played in that effort, together with Iraq's other leaders, and we look forward to continuing to build on the partnership between our two countries. There is still a lot of difficult work that must be done, but as we move forward, the Iraqi people should know that they will have the unwavering support of President Bush and the United States in consolidating their democracy.